How to Deal with Competition (or Not)

As an entrepreneur, one of the biggest sources of stress you have with your startup is likely your competition. It’s easy to become really paranoid about each move they make, each feature they launch and each piece of content they’re publishing. Everything can feel like it’s aimed directly at burning your castle to the ground. So how do you deal with that? Or do you even deal with it at all?

A competitive change of mind

Back in 2008 I built a hosted ad serving platform. Publishers could sell, manage and serve ads and I’d take a cut. But shortly after it launched (one week, actually), Google launched Ad Manager…essentially solving the exact problem I was out trying to solve. A few weeks later, I decided to just sell it off and move on. The mere thought of competing with Google was depressing.

A couple of years after that, in 2011, I built a survey platform. But unlike the ad serving industry (which had virtually zero competition when I started it, minus some crummy self-hosted stuff), the survey industry was overwhelmingly crowded. There were quite literally thousands of competitors.

What changed in three years? What mental barrier dropped that made me okay with going head-to-head with such a crowded industry?

The change was the understanding that competition does not matter. In fact, I’d go so far as to say you should completely ignore it.

A touch dogmatic? Maybe so. But I think the inverse is much more dangerous.

What happens when you watch the competition

It’s so easy to fall in to the habit of checking up on what your competition is doing. You start checking their blog regularly to see if they’ve released any new features, you add their name in Google Alerts, you follow them on Twitter…all so you don’t miss out on their next big move.

But here’s the problem: doing this puts you perpetually one step behind. It makes you reactive instead of proactive. 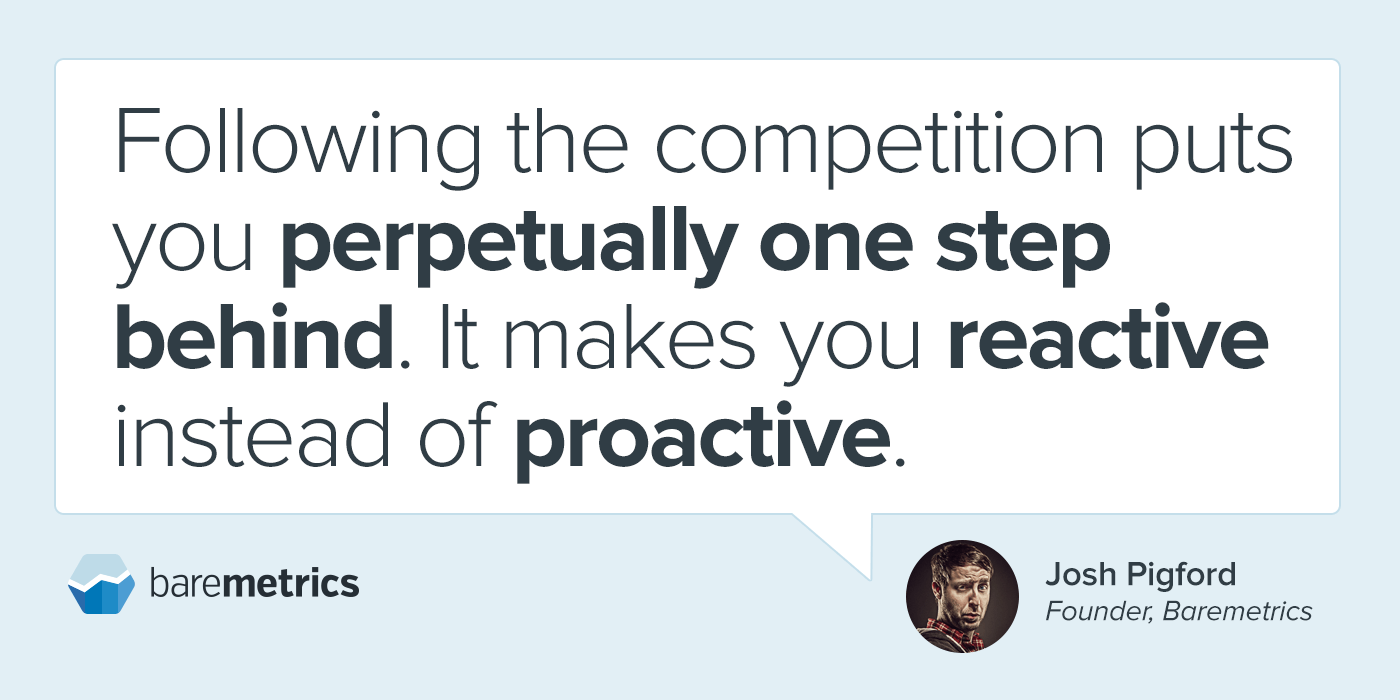 When you built your product, you built it because you were able to solve a problem in a unique way. When your customers signed up for your service, they did it because they also believed in the way you were solving a problem.

Stop solving problems for people who aren’t your customers. Sure, you may have some feature parity with your competition, but when you build a feature and how you build it should only come from and be prompted by the needs of your customers.

When to pay attention to competition

I do think there’s one instance where it makes sense to pay some attention to competition, and that’s when your own paying customers leave for a competitor. Namely, when you start noticing it happening regularly.

It’s important to do exit interviews with your customers to better understand exactly why they’re leaving, and if they’re switching to a competitor, you need to understand what it is about the way your competitor is solving a problem that you aren’t doing well.

You need to be careful here. You definitely don’t need to build out new features solely to try and save a handful of customers. That may make for a tiny short term gain, but likely has bad results in the long term with a bloated product that lacks direction.

The key is find the commonality among all the customers who are switching to learn what exactly it is you may be able to improve on.

What you and your customers need is focus. Having a strong belief in what you’re building and how you’re helping your customers ultimately results in a better product that solves real problems.

Competitors will come and go. You’ll likely find yourselves heading down different paths the longer you’re in business. You’re each incrementally improving your product and doing so in different ways.

If you’re in it for the long haul, as long as you’re laser focused on solving your customers problems, you’ll do just fine.