Setting your pricing model might be the most important decision you make on launch. Set it too high and you risk losing customers. Set it too low and customers might overlook you as a cheap solution. Plus, it’s much more difficult to raise prices after launch, unless you grandfather existing users into their previous pricing plan. And grandfathered users mean lost revenue.

Has anyone found the secret to perfect pricing? We can’t say for sure. But what we do know is that we’ve got a ton of helpful data just waiting to be analyzed. Hopefully we can provide some insight into common pricing practices across the SaaS world.

Our mission: to dissect this (anonymized) data to find gems of pricing best practices.

Diving into the data

We looked at anonymized data from 881 active companies, with 6,566 active plans, where active means having subscribed customers. We wanted to answer four pricing questions:

We also looked at company and plan churn rates, although if a customer churned from one plan, we weren’t able to determine if they signed up on a different plan.

For the cleanest data, we filtered out any plans with less than 5 customers, assuming these were probably test plans or at least not relevant enough to include in the analysis.

Have you ever noticed how many companies offer plans that end in .99 instead of rounding up to a whole number? The theory, given the name “psychological pricing” or “charm pricing” is that most customers view $9.99 as a lot less than $10. It’s the difference between spending ten dollars, and “less than ten dollars”. Even though it’s a difference of only a penny, the mental jump is big. In theory. So which plans perform better?

We compared the performance of plans using psychological pricing to round number prices to see if there was a clear winner. We took any plans ending in .99 down to .95 for our data set. 14.5% of all active plans fell into this bucket.

While revenue growth didn’t change dramatically between whole number pricing and psychological pricing (median growth of 4.48% to 4.36% comparatively), there was a big difference in the number of subscribers.

Why is this? We can only speculate. One theory is that companies who have put enough thought into pricing to use charm prices probably have put similar thought into other parts of the business. They aren’t successful because they have 99c prices, instead, the idea to try different pricing strategies comes from the same brain that made the rest of the business successful. 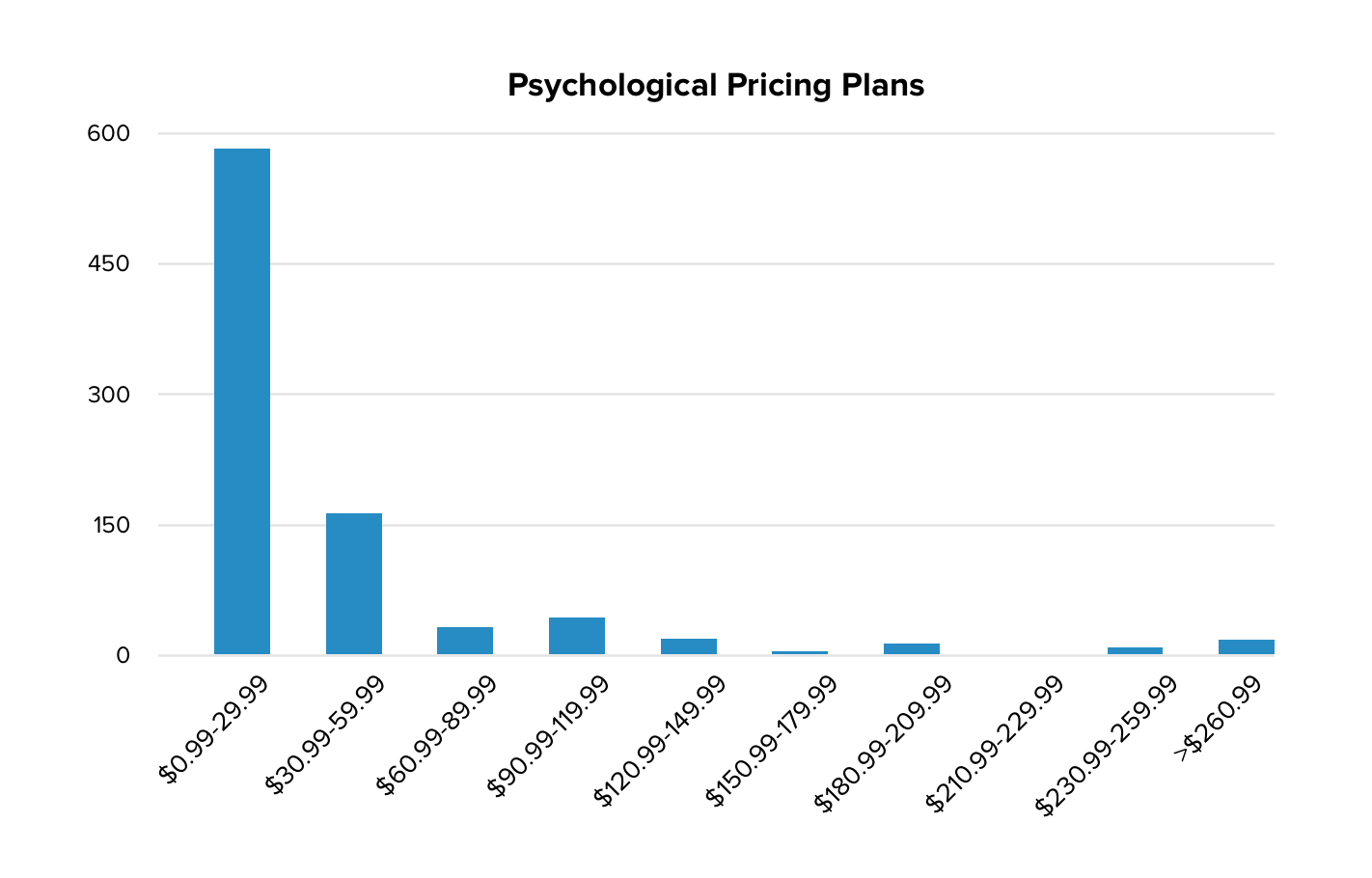 Out of the top 10 highest revenue companies, only four used non-round number plans in their pricing. It’s definitely not a clear winner in pricing best practices, but it does seem to bring in more customers than whole number pricing plans, if pure customer growth is a focus for you.

Are more plans better for business?

Companies in our data set varied wildly when it came to how many different plans they offered. From companies that stuck to just 1 plan (2% of the group) to our most prolific plan creator at 276 plans, there wasn’t a clear “standard” when it came to creating new plans. The median currently sits at a very tidy 4 active plans per company.

What does that mean for you? Don’t hesitate to play around with pricing if you want to offer non-profit, discounted or bundled plans. There is seemingly no drawback, and as long as your billing platform allows you to manage plan changes effectively, customized pricing is worth trying out!

Benchmarking price points can’t tell us much about best practices. All of our customers sell different products so it’s tough to compare your own prices to theirs. It is still interesting, academically, to see what the most common pricing points are.

As you can see from the histogram above, most of our customers’ plans are under $100/month.

Offering an annual plan at a discount can be a great way to grow your bank account. If customers are confident in your product, they will happily pay for a year upfront. That means more money to put towards growth right now. Money in the bank is always worth more to your business.

Are companies taking advantage of this strategy? Not as much as you might expect. Only 48% of companies offer an annual plan, which certainly seems like a lost opportunity.

This is a little on the low side. Most customers would require more incentive to commit to a full year upfront. For example, Wistia offers 20% off their annual plans.

In August 2016, we used in-app messaging and a three month free promotion (25% discount) to entice customers over to an annual plan. Pushing an annual plan to happy customers was a great way to increase our bank account balance and keep customers committed for longer.

If you are one of the 50% not offering an annual subscription it might be worth giving it a try!

As a side note, we also see 1% of our customers offering daily subscription plans. A very unique strategy for subscriptions. I can’t think of anything I would subscribe to on a daily basis!

You can view live SaaS benchmark data on our Open Benchmarks page. But this is just a start to the information we could pull out of this anonymized data. Have more questions or want to dig into one of our points above? Post in the comments below and we’ll do our best to go deeper.