Bootstrapped to Funded: What’s it like? Was it worth it? Should you do it?

I’ve been building products and creating businesses for a solid decade. Prior to Baremetrics, I’d started just about every type of business imaginable: consultancy, ecommerce, content, software and more. And while the business models have all been different, the one unifying factor is they were all 100% bootstrapped to the end.

So, what’s it like going from a decade of bootstrapping to running a funded business? And what’s it like transitioning a business that started out bootstrapped to having a pile of cash at my disposal? Has it been worth it? Is VC money evil? Gahhh, so many questions!!! Let’s find some answers.

Prior to 2011, I honestly had never given VC money a single thought. I was blissfully unaware that it was common. My entire thought process behind building something was “here’s a problem, now let me figure out how to build it.” I’d teach myself the skills necessary to get it off the ground and then charge money for it.

I then started building a survey platform and my co-founders put a bunch of money into it and we started looking to raise a small seed round. I was dropped into shark-infested waters and it was intensely uncomfortable. Lots of meetings with VC’s who were nice enough, but I always felt like my goals for the company never jived with their expectations.

So, after that, I was staunchly opposed to raising money. I went from being naively unaware of VC money to naively categorically opposing it. Neither of which were particularly useful or healthy.

Then I launched Baremetrics.

Things took off much quicker than anything I’d previously done. After making our metrics public, and then Buffer doing the same, Baremetrics began to get a lot of exposure.

Our financials were public, which meant our 30%+ growth rate was also public. Quite a few investors started reaching out.

At first I dogmatically turned down all the calls. I was laser focused on building Baremetrics and I wasn’t about to let some sleazy Silicon Valley used car salesman try to force my hand.

Then I realized I was being too harsh. Not on the focus part, but on investors in general. I was talking to a few pals who’d taken on seed rounds and instead of it being an awful experience for them, it was completely positive. It wasn’t the nightmare scenarios I’d pictured or read about and I realized that there are actually great investors out there who aren’t greedy and overbearing.

So, I started taking some of those calls I had previously turned down. I started having some legitimately great conversations with investors who had interesting insights. Investors who had perspective and experience in certain markets that I didn’t and many who had built quite a few businesses themselves.

It changed my entire view on investors.

The more conversations I had with investors, the more I realized I was in a relatively unique and favorable position. I had the power to walk away. I didn’t need their money. I was a one-man show with very little overhead who was profitably running a fast-growing business. 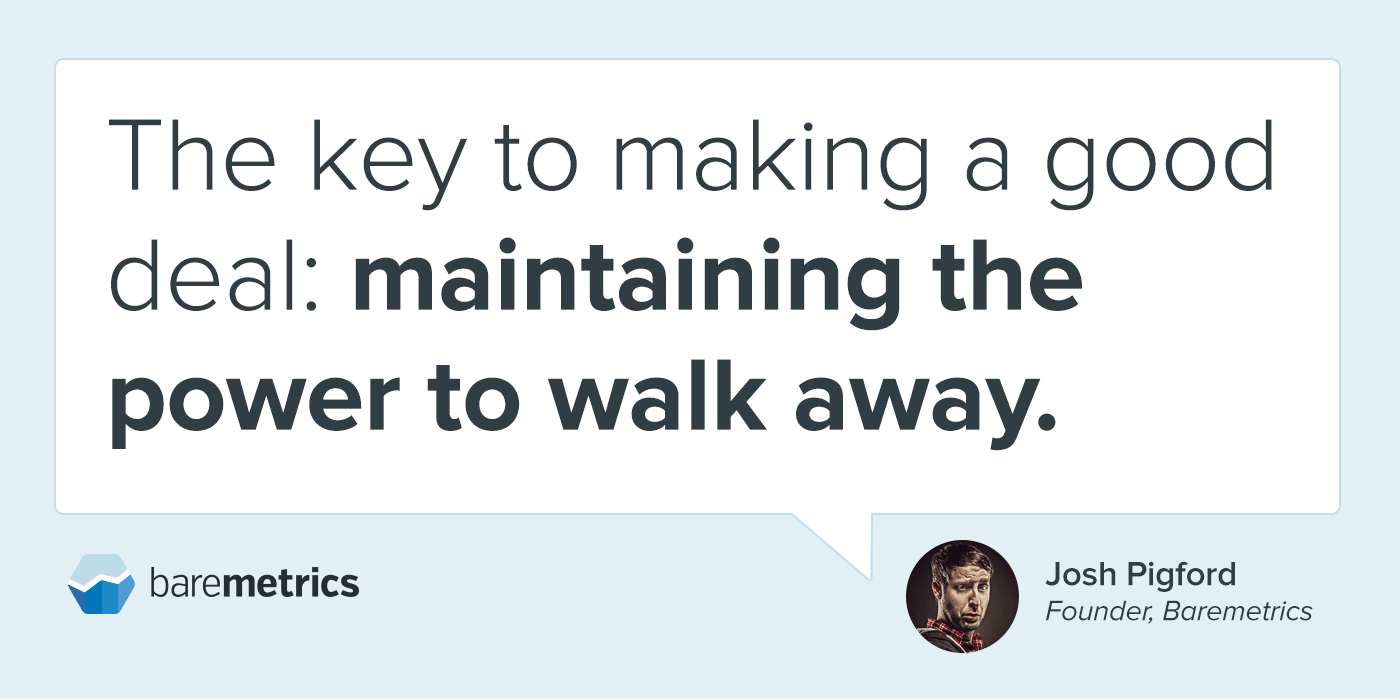 I was clear about the types of deals I wasn’t interested in and was able to avoid wasting time trying to make deals happen that just weren’t in my best interest.

I wasn’t interested in giving up board seats or lots of equity and so until I found an investor who was inline with that and could agree to those terms, I would walk away.

This past July, I was having a conversation with Patrick at Stripe, which led to conversations with the good people at General Catalyst. They were completely on board with the way I wanted to run things and the type of deal I wanted to do.

We closed a $500,000 round of funding with really great terms. This was the deal I wanted.

Why take funding at all?

Wait…if I was a one-man show with very little overhead who was profitably running a fast-growing business, why take funding at all?

The high level answer is that it lets me grow faster and larger by hiring more people who can in turn build a more full-featured product that in turn brings in more customers and the snowball continues. But it was more than that for me.

I’m a maker. For me, the process is the rewarding part. The overall experience is what fuels me. And after 10 years of building things on my own, I was ready for a new experience. A new process. Something unfamiliar. That, really, is what my primary motivation was to take on any funding at all.

So, here we are with a big pile of cash. What’s changed? What’s better? What’s worse? Am I happy I did it?

The most obvious/literal thing that changed going from bootstrapped to funded is that my bank account…grew.

Having more money at your disposal is unquestionably freeing. I still pay attention to the bank account. On the first of every month I still update our 12-month profit & loss projections. I still cringe when I see how much Uncle Sam robs us. But now I don’t sweat the small stuff.

Worry whether I should spend $200 on a quick Twitter Ads test? Just spend the money. Buy Kindles for the team as a perk? Just spend the money. Put together a company retreat that’ll set us back $10,000? Okay, ouch. But still completely worth it and made possible this early in the game because of that investment money.

Growing from a team of one (me) to a team of six…that’s been such a major shift for me. I went from literally handling all design, development, support and marketing to…almost none of that.

I now spend my time making sure our team has everything they need to keep moving forward, planning the future of the product and marketing. If you’d have told me a year ago that I’d be doing employee 1-on-1’s and planning a company retreat, I’d have laughed at you and kicked you in the shins because that’d have been ridiculous.

Most of the time, building a startup isn’t stressful. Sure, it can be nailbiting at times, but for the most part I’m 100% stoked to be building something that people love.

That being said, there is certainly more I worry about. Or, worry may not be the right word but…I certainly have a lot more I need to take in to consideration.

There’s just a heck of a lot more at stake now. The biggest thing being that there are now 5 people on our team who are depending on me to not run this ship in to the ground. As much as I want to build a great product, I want even more to do right by my team…the people who’ve chosen to make Baremetrics a major part of their lives.

I want them to look back on their time here and to have loved it and for it to have been absolutely worth it.

And what about high stakes with our investor’s money? That’s the argument many times against VC money is that you become a minion for the investor and have to make every decision based on their unreasonable desire for wealth.

That may be true in some situations, but that’s completely a byproduct of the deal you do and who you do the deal with. That’s just not the case for us. General Catalyst isn’t that type of investor and the terms of our deal simply don’t allow for that.

Who you do a deal with changes everything. All money is not equal. 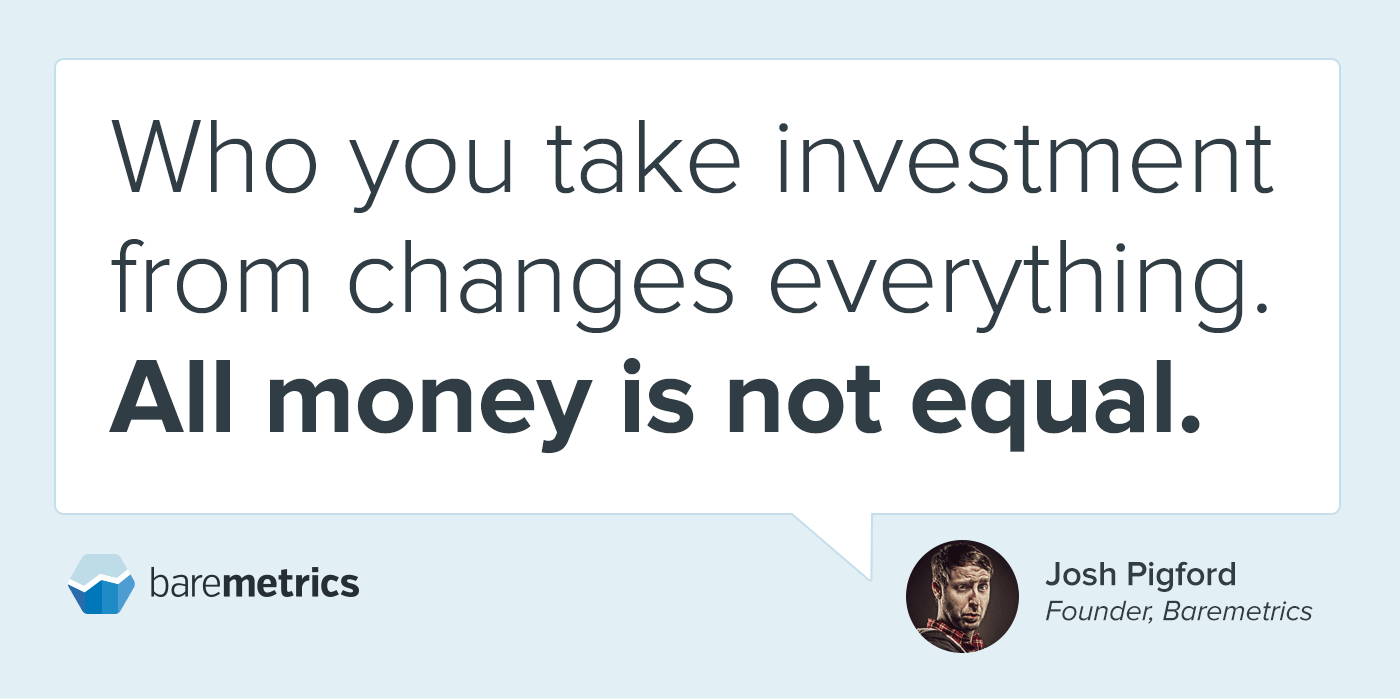 One surprising thing the funding has done is changed my perspective on what Baremetrics could be long term. Baremetrics started out as a side project and for a while I had a bit of imposter syndrome, each month thinking “surely this is the best Baremetrics will do, this can’t become an extremely profitable business.”

But what I’ve realized as the team has grown and our customer base has grown is that Baremetrics can in fact be a very big business.

It’s motivated me to build something larger than myself and to me that’s one of the most exciting parts.

Bootstrap vs. Funded. What’s the answer?!?!

Okay, but really. Bootstrapped vs. funded. Which is better? There are literally thousands of articles about “bootstrap vs. funding” but that’s about like asking “hammer vs. paintbrush”. It’s the wrong comparision. They’re just different tools for different jobs.

So the answer to that question is: whatever you think is best for your business. There are so many people who are bootstrapping and feel like “VC”, “funding” and “investor” are all dirty words, or that taking on funding is somehow admitting defeat. That taking on cash somehow says “you weren’t capable of doing this by yourself.”

And you know what…maybe that is the case. Maybe funding helps get you over a hump in a way that you couldn’t do by yourself…and that’s okay. The key is to do it how you want to do it on your terms.