A few weeks back I wrote about our experience going from bootstrapped to funded as we raised a $500,000 round, why it was good for our business and some of the things we’ve learned along the way. Now, I want to give you an in-depth breakdown of why and how we spent $250,000 in the months after receiving our funding.

The purpose of this post is to give some insight into the costs of a small team building a startup. Maybe there are places you’ll realize you’re spending too much, or areas where you could stand to spend more.

There were certainly times we could have done things cheaper or instances where the money I spent was a bad idea or won’t payoff for many more months. I’m definitely not an expert at building a company, so you may very well balk at some of this. If you do balk, please balk in the comments…no sense in internalized balking. It’s unhealthy.

The large majority of our expenses have gone to payroll for our team and contractors.

We spent roughly $50,000/mo on payroll, payroll taxes, payroll processing and contract workers. In the 4 months since the funding, this added up to roughly $200,000.

This is the biggest internal struggle for me. We aren’t spending Silicon Valley-amounts on salaries, but we’re certainly not on the low end. From the perspective wanting my team to love where they work and not have to worry about money, I’m very happy with the salaries everyone gets.

From the perspective of making our funding stretch as long as possible, we’re spending too much here.

This isn’t a topic that’s black and white, though.

We could have gone the extreme-cost-savings route of outsourcing the entire development to a dev farm on Elance for a microscopically small amount, but I guarantee you we’d have an awful product. We can all agree that’d be a bad idea.

On the other end of the spectrum, you can certainly spend too much on salaries. We fall somewhere in the middle of that spectrum, probably on the higher side.

This has unquestionably been the area I’ve had to learn the most. Figuring out what everyone’s salaries should be is unbelievably difficult.

In hindsight, doing what our pals at Buffer do with their Salary Formula would have been really nice.

The infrastructure to run Baremetrics, while not huge by any real measurement, still isn’t cheap. It takes a decent amount of computing power to crunch the numbers for our data set, which is over 55,000,000 records and just over 65GB in size, and growing daily.

Most of our hosting costs are tied up in Postgres (on Amazon RDS) and background workers (on Heroku). We’re working on moving away from Heroku, which should reduce hosting costs a good bit.

We typically don’t hold back on spending more money on infrastructure as that’s a key part of making sure Baremetrics is useful. We certainly haven’t aced this yet, but we’re worlds better in this department than we were a year ago.

We also have a surprising number of domains (34, to be exact). Between purchasing the .com, a few variations on the domain (to handle misspellings), and domains for some big marketing campaigns in the future, we’ve spent around $1,500 on snagging the domains we needed.

We use a lot of tools to make running our business easier. Tools that, in many cases, replace the need to hire people.

Tools are an area many founders get hung up on. They make the mistake of thinking it’s a good use of their time to build internal tools as a method of cost-saving instead of focusing on adding more value to their own product.

It’s one of the things we fight against here at Baremetrics. Some companies leave saying, “We’re just going to build our own internal revenue tools.” Then, 3 months later they come back having wasted hundreds of developer hours and realized how hard it is to do correctly and they reactivate their account. 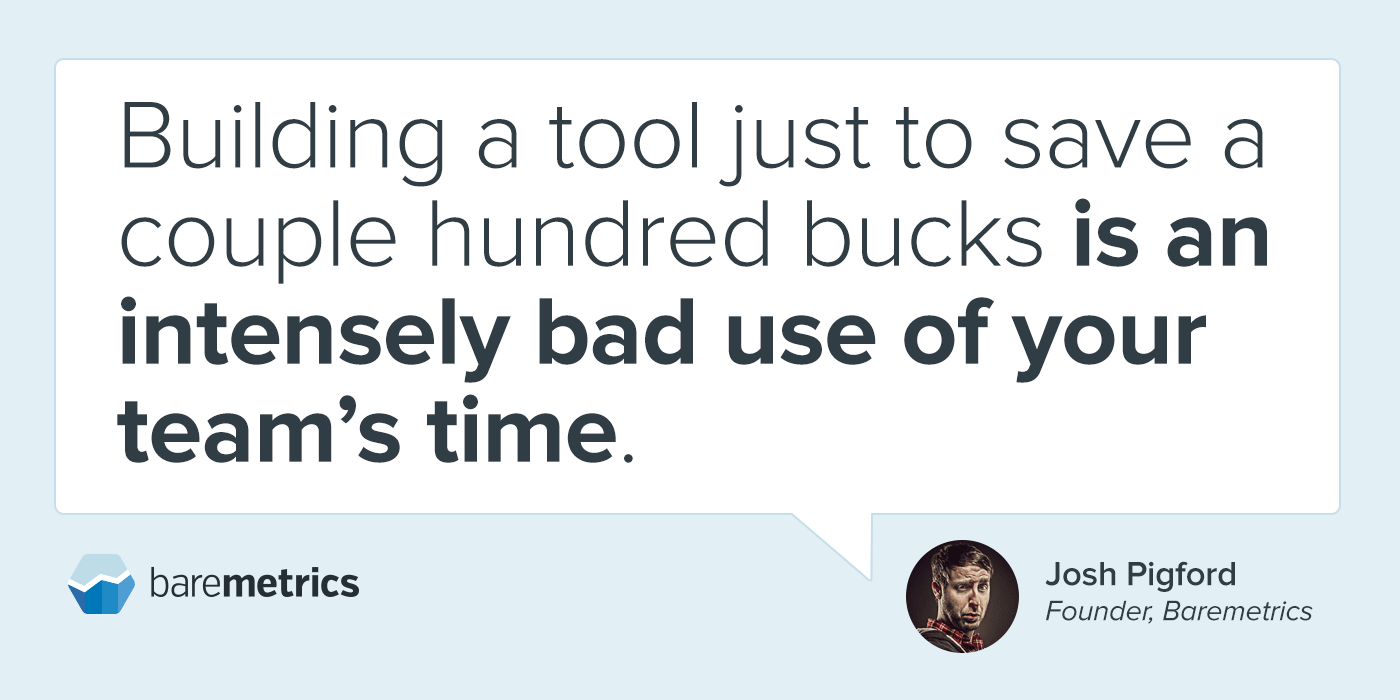 Building something for weeks (or months) just so you can save a couple hundred bucks is an intensely bad use of your team’s time. You’re much better off spending that time adding more value to your product, which in turn makes you more money.

The large majority of our travel expenses were wrapped up in the plane tickets and lodging expenses associated with the retreat we did last month. Yay plane tickets!

Teams of our size that aren’t remote won’t have these types of expenses, but it’s a necessary part of the game for us and something I’m happy to spend money on.

Turns out job listings on major sites adds up quickly, with some listings costing as much as $450.

I broke out some of these expenses in our Guide to Hiring Remote Customer Support.

In hindsight, the large majority of the job posts were useless. None of our full-time, paid job listings lead to hiring anyone.

The primary form of advertising we do is retargeting (via Perfect Audience). In the past it’s gotten us new customers for as little as $6. Lately it’s been more expensive, but it’s still very much worth it for us.

We’ve tried Twitter Ads and Google AdWords, but in general those require sacrificing a limb per click and aren’t worth it.

This is an area that in hindsight I could have saved a solid $3-4k, especially on AdWords. I wanted that to work so badly and didn’t cut ties soon enough.

Accountants and lawyers are people I happily pay for, and in my experience you get what you pay for. I have zero desire to learn the in’s and out’s of tax law or figure out the right way to word a contract. It’s an epically bad use of my time and I’d screw it up.

A big chunk of this total was spent incorporating Baremetrics and handling all the paperwork for our round of funding.

You need insurance for your business, regardless of size. We spent roughly $2,000 to get our policy off the ground.

We used Founder Shield for that and it was entirely painless. I don’t have more to say about this because Founder Shield literally made it a no-brainer.

I want my team to be happy, and part of that is having various perks/benefits. It’s important to equip your team to not only work well, but also live well.

For us that means everyone gets a Kindle Paperwhite with unlimited Kindle books, a Jawbone UP, minimum vacation days, random gift cards and a $250/mo “remote stipend” that can be used for anything (phone, internet, food, gym membership).

Above I broke out how we spent money for the 4 months following our funding round. Thankfully, we’ve brought in over $100,000 in revenue during that time frame as well, and we’re growing revenue about 10% month-over-month.

A common scenario when you take on funding is that you operate at a loss for a while. The idea being that spending a bunch of money now results in making more money later. More than you would have otherwise. You obviously can’t operate at a loss forever…you only have a limited amount of money to burn through. This is your runway…the amount of time you have until you either need to be profitable or find some new influx of cash.

At our current rate, we’ll actually be profitable again well before we burn through the cash. The only real scenario that would change the situation is if we make another full-time hire soon. In that case we’d effectively end up with a 12-month runway.

This post is honestly a bit scary for me. It opens the doors wide for extra scrutiny from potential customers, competitors and other entrepreneurs. My hope is that offering some insights in to how we’re spending money will help both other startups and us to spend our money more effectively instead of all things “money” being kept private.