How we scored Baremetrics.com for $616

A couple of weeks ago, after 11 months of work, I finally snagged Baremetrics.com for an entirely reasonable $616. Here’s how that played out.

Back in October 2013, when I birthed the idea for Baremetrics right out of my skull, I attempted to get the .com. As is always the case with any name for any good idea ever anywhere on earth…it was taken. Sigh.

Thankfully, .io is practically the same thing as .com these days. So that’s what I went with. Given what was showing on Baremetrics.com at the time, I wasn’t terribly concerned about confusion with our product because…butterflies. 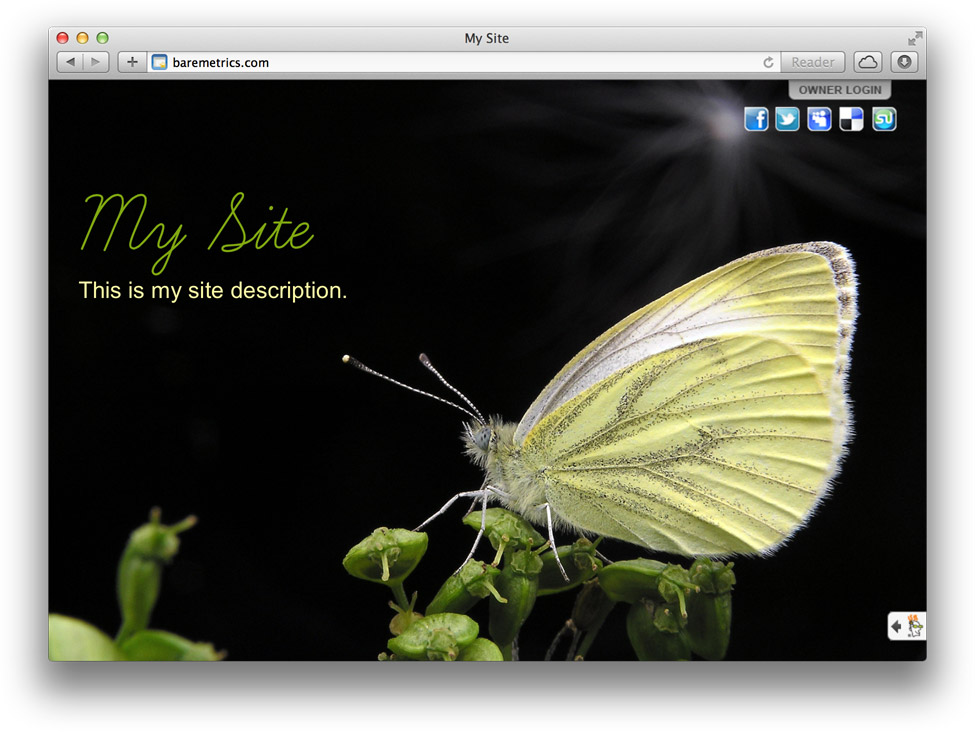 After I registered the .io, I attempted to email the owner of the .com. I wasn’t sure what to expect, given his email was something to the effect of “ThugStreetPreacher4Life@gmail.com”, but I sent him a note with a $500 offer.

A month later, I sent another email offering slightly more.

This went on for a few more months until I was finally resolved to the fact that it just wasn’t in the cards.

Then, in August, that $500,000 investment showed up. I figured I had a bit more money at my disposal, so maybe I should just offer more?

I sent Mr. Thug Street Preacher another email offering $2,000, but was met with more, you guessed it, silence.

I started looking around for a bonafide domain bounty hunter (who hopefully looked something like Dog the Bounty Hunter) to try and snag it. I used a guy quite a few people recommended, and even he was no match for ThugStreetPreacher4Life. We were offering up to $5,000 at this point and never got a response.

Emails and phone calls were all met with silence. It was maddening. I just wanted some sort of acknowledgment. Some iota of hope that we could make it happen. Then GoDaddy came in the picture.

I transferred all of my domains (and business in general) away from GoDaddy a couple of years back and have kept my distance since. But that was the comfy home of baremetrics.com and GoDaddy was my last hope here.

Initially the domain was set to expire in November 2014, so I paid for their domain backorder service, hoping to instantly snatch it up when it expired.

But shortly thereafter, the domain was renewed for another year. That’s when I stumbled upon GoDaddy’s Domain Buy Service.

You tell GoDaddy what price range you’d like to try to get the domain within, then they reach out to the domain owner and negotiate a sale. Given the domain was hosted at GoDaddy, they had much more efficient means of getting in touch with the owner past the WHOIS data.

Then, 9 days later (and over 11 months since I first attempted to get the domain) the email came. 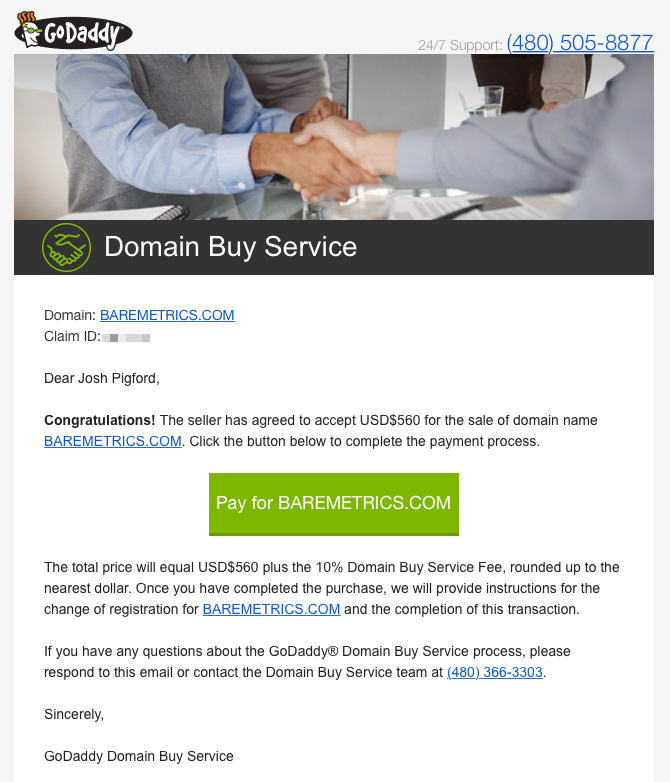 (I happened to be on a 2-week road trip with my family at the time and I basically started squealing like a little girl in our hotel room when the email came in.)

I paid for the domain as quickly as possible and a few days later, the domain was officially in my possession.

How on earth I got this for ~$600 is beyond me. By the time GoDaddy negotiated the purchase price, our $500,000 investment was public. A 30-second search would have made that pretty clear and, in reality, I’d have happily paid more than $600.

Definitely not going to overthink it, though. I’m just happy the domain overlords saw fit to grant it to me.

I wish there was some sort of magic voodoo recipe I could give you for getting any domain you’d like. The fact is, I lucked out. Big time.

If you want another human with far more experience than you at acquiring and negotiating domain sales, talk to Kellie Peterson of Dotology.

However, if you ended up in a situation like us where the WHOIS info was a complete dead end, it’s worth looking in to whatever domain auction/buying service that domain’s registrar has.

For us, GoDaddy came through like a champ. I really can’t recommend their Domain Buying service enough as it worked beautifully for us.

Got any riveting domain acquisition stories?