How to use customer feedback to drive your business

While customer feedback is crucial to your startup, it’s also something most founders have a love/hate relationship with. How do you decide if feedback is valuable or not? How do you keep complaints from dragging you down? Where do you draw the line on letting feedback steer your company?

We’ll take a look at answers to those questions, along with a story and announcement about how customer feedback is directly changing a core part of Baremetrics.

There are two types of feedback you should be collecting: solicited and unsolicited.

With “solicited” feedback, you’re actively going out and asking questions of your customers. You’re sending surveys, personalized emails, and in-app messages. This type of feedback happens in more predictable intervals as you’re the one initiating it.

NPS surveys have been the most consistent way for us to get regular feedback. In addition to those, we send a series of lifecycle emails to onboard customers (and collect feedback about their experience) as well as product research messages via Intercom’s in-app messaging feature.

“Unsolicited” feedback is what you’ll receive most of the time. It’s the random emails, help desk tickets and tweets that come in at completely erratic times.

Both types of feedback are valuable, but how you collect and take action on the feedback is even more important.

How to organize feedback

If you just read feedback and never act on it, you’ve wasted everyone’s time. There isn’t one “right” or “best” way to organize it. The key is to just do it and do it consistently.

We have two places we organize the feedback we receive.

We have a Product Ideas project in Asana that we add items to as customers’ (or our team) suggest things. Then, we can add comments to those items as necessary and prioritize them based on the number of requests we receive or the business value they’ll add. 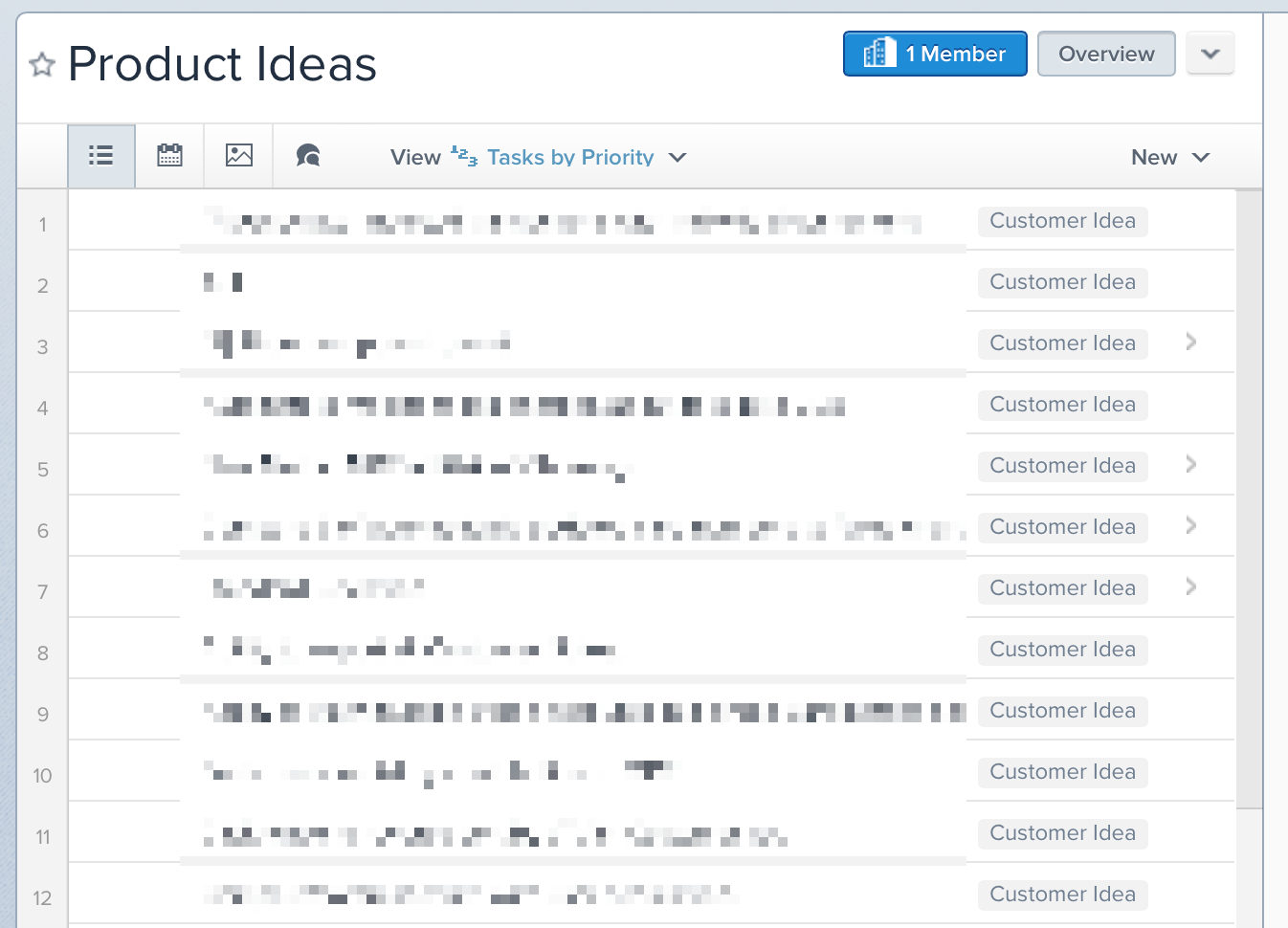 Intercom is great for understanding the context in which feedback was given. Was it the result of a bug? Were they frustrated when they sent in the request? How did we leave the conversation with them?

When doing product research, we’ll tag messages that customers send in, so it’s easy to find them all later. We also will tag customers for beta features so we can automatically message the correct segment of users when we start beta testing something.

Many points of feedback in Asana end up linking back to conversations in Intercom, so there’s a decent amount of overlap.

How to decide what feedback is valuable

You’ve got all of this feedback, but how do you decide what to do with it? Between our “Product Ideas” board, thousands of Intercom messages and innumerable Twitter conversations, figuring out what’s actually important can be difficult.

“Value” is a relative term, especially when it comes to new businesses. Your metrics for success, or what you need to get to the next goal in your business is highly unique to your stage of business.

While the answer to what is “valuable” may be relative, the need for establishing what the next milestone or success metrics you need are not, as that’s how you determine what feedback is valuable. It’s easy to let the vocal minority pull you in the wrong direction, but happens much less frequently when you know what you’re shooting for.

Once you’ve solidified what the next steps are that your business needs to take, determining how to value feedback becomes very simple and takes very little time to decide if you should ignore or give weight to a customer’s feedback.

Maybe what you need more than anything is profitability, so doing anything that delays that is bad feedback. Maybe you need users more than money, so any feature that slows down signups is likely a bad move. You get the idea.

Let’s take a look at a real world example here…

How we changed Baremetrics based on feedback

When I built the first version of Baremetrics, my goals were simplistic. I just wanted simple revenue metrics for the business I was running at the time. It solved my problems, and then I came to find out it solved problems for quite a few other businesses as well.

The foundation of nearly all of our metrics came down to two things: Monthly Recurring Revenue (MRR) and Customers (namely if they were “active” or not).

For the past year and half of our existence, we based these metrics on “charges”. Internally we called this “charge-based MRR.” My thinking was that this was the most accurate way to calculate MRR and decide whether a customer was active or not. If they paid you, they were “active” and counted towards MRR. If they didn’t, they were no longer active and did not count towards MRR. Sounds easy enough, right?

Then as we started growing and hundreds of businesses started using our platform, we started noticing unusual holes in this method. Failed charges would cause unexpected dips and spikes. Delays from Stripe with running the charges wreaked havoc as it was unpredictable about when you’d see charges drop off. And then there’s the whole issue of months not having an equal number of days. February 28 would cram as many as four days of charges into a single day, showing a big spike in revenue.

There were just so many weird things that would happen because of this “charge based” method and the more we talked to customers, the more we realized it was a major source of distrust. Many were, understandably, wary of the metrics because they were all over the place with no obvious rhyme or reason.

Finally, at our team retreat in January, we started throwing around the idea of changing the basis of MRR and Customers from “charges” to “subscriptions”.

The more we researched this and the more we tied back the pros as solutions to the complaints we were seeing from customers, the more it just made sense. Using this method lets us surface significantly more detailed and reliable insights, which is ultimately what customers wanted.

So what’s the takeaway here? It’s crucial to not only listen to customers but also to understand the motivation for their feedback. Without understanding the motivation, you could very well build the wrong product. 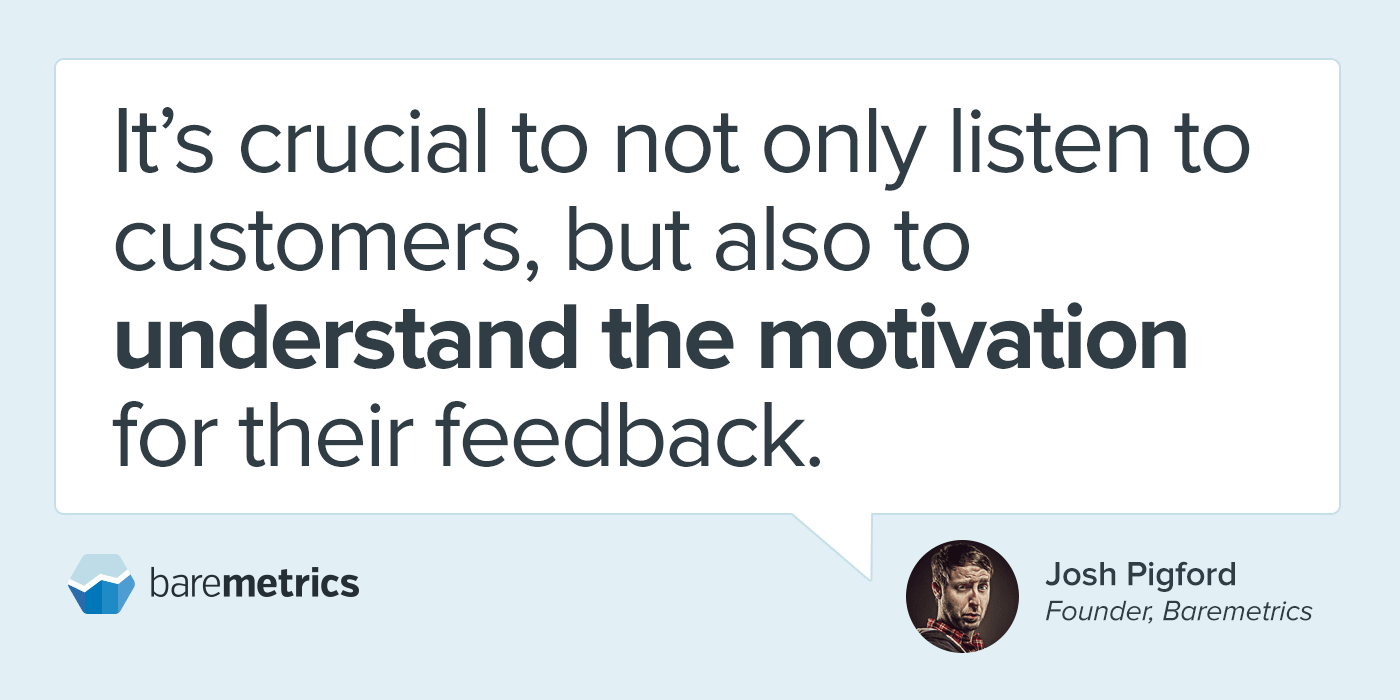 None of these changes would have happened had we been overly dogmatic about the path we were on. Listen, understand and take action.

As a little bonus, I figured I’d include a little preview of what is starting to roll out now.