How We Got Our First 100 Customers

How do you go from “no one on earth knows I exist” to “dozens of people I don’t know are now giving me a chunk of change on a monthly basis”? That’s the ultimate question, right? Because answering that is how you start a business. It’s a major milestone for anyone because it’s a hard one to get to. After that you start getting a bit of a snowball effect and it self-perpetuates.

However, generating a snowball effect is hard when there’s no snow.

So, let’s take a look at how Baremetrics (subscription analytics & insights) got its first 100 customers over the course of about 4 months.

What I didn’t do

Typical wisdom tells you that you need to build hype and generate buzz. Start a blog! Collect email addresses! Build a landing page and people magically drop in their email address! Have a private beta! Give out free accounts! Give out coupons! Invite influencers to try your product! Send out press releases!

I did (and have done) none of those things to grow Baremetrics.

I like better odds than the lottery, so I chose not to go those routes. Given most startups fail, conventional wisdom sounds like a pretty bad path to follow.

An unlikely, but in hindsight totally obvious, hero

So, what was the magic pill? How did I make it snow so I could start my proverbial snowball?

I’m going to tell you, but you’ve gotta promise to hang with me to see this through. The “why” is actually more important than the “what.”

My secret weapon, and source for the large majority of Baremetrics’ first customers, was Twitter.

I know. Weird. It’s even more weird considering Baremetrics has no free plan, no free trial and the average customer pays nearly $70/mo. Why on earth would 140-character blobs of text drive dozens of new customers to spend thousands of dollars in recurring charges?

Since launch, Baremetrics has been shared/mentioned literally thousands of times (rough estimate is around 4,000 tweets over the past 6 months). But why has that driven new customers and, more importantly, new revenue?!?!

Well, I think there’s an explanation. And lucky for you, it has nothing to do with the number of Twitter followers you or I have.

Twitter is the “what”…now, here’s the “why” (and it’s what you promised to hang with me for).

The key isn’t in the medium or the mode, but the solution

It’d be great if this was a simple “12 Steps to Make Twitter Print Money” post, but alas, that junk doesn’t exist in the real world.

Twitter was the medium, and the real mode was word-of-mouth. But what drove the word-of-mouth? Why have thousands of people felt compelled to share a business tool in a relatively small niche (SaaS businesses using Stripe)?

Pain, on some level, plays a part in nearly every business decision you make. Seriously. Look at any B2B product that’s been built…ever. It’s almost always been birthed out of the need to get rid of a painful process.

The reason is, pain is inefficient. We avoid it at all costs. But in reality, that painful process is also usually pretty necessary to the health of the business.

Solving a major pain for any business means direct access to their pocket book. 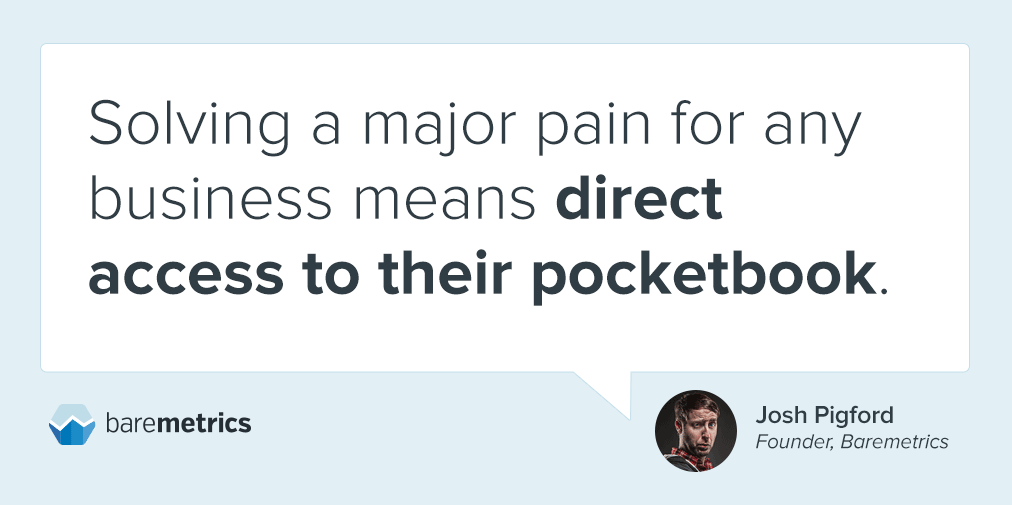 How we specifically solved the pain problem

People were spending hours every week manually calculating these metrics in spreadsheets or they were wasting their time hacking together their own half-done solutions with the Stripe API and still not getting all that they wanted. But these metrics are critical to their business, so the instant a solution showed up that saved them hours of time, they jumped at it. And then told all of their entrepreneurial pals.

What made this particular solution conducive to sharing (and what grew our customer base completely by word-of-mouth) was the immediacy of the solution.

Baremetrics has no setup process. No settings to fiddle with. No code to integrate with your app. You click one button and you get a dashboard full of meaningful metrics (those are our actual metrics, FYI).

You don’t have to wait for events to roll in so you have data to calculate days or months later. You instantly gain insight in to your entire history with Stripe…insight that many of our customers have never seen before in any capacity.

That has an intense “wow” reaction.

do you use @Stripe? go get this, now: https://t.co/FQYR7PLlRj

If you use Stripe to process payments and are exporting/crunching data in Excel, save your self loads of time and use http://t.co/gT1szEuLEr

I’m very, very happy to be contributing to these numbers. @Baremetrics is one of the most useful tools I pay for. http://t.co/uF6Nwuhfmp

Signed @lamplighterapp up for @baremetrics. Wow. It would’ve taken hours to gather that data ourselves. Very cool. http://t.co/MYAIk6FtT7

If you use Stripe, the only option is to also use @Baremetrics for understanding your payments and subscription data.

Using Stripe? @Baremetrics is awesome. Instant insight. Knowing is half the battle https://t.co/6GnPtFkfOx

Those are all Baremetrics customers who, with no prompting, posted about Baremetrics shortly after signing up.

So what does this mean for you?

Okay, okay. You’ve persevered through my soapbox about solving painful problems for businesses. But what does this mean for you? Is there something you can do today? Right now?

The quickest way to make this happen, that requires the least amount of work, is changing your messaging. The way you position your product.

Make it directly address the pain your potential customers are having and make the choice to use you so obvious, they can’t deny it. Because remember, when people have a huge pain solved, they talk about it. They want to help other people get rid of that pain.

A shift in your business

Long term, this is a core-business issue. If your product is just “nice to have,” you’ll perpetually struggle to get customers. And getting customers at any price-point higher than ~$20 will be borderline impossible.

At the core of your business, you need to do at least one of the following in a major way:

Baremetrics does all three. We save businesses the time of manually entering data in their spreadsheets, we save them money from having to develop their own solution and we create value by giving them financial insight in to their business that they didn’t have before.

The combination of doing all three is what’s a big win for us and why getting those first customers (at a “premium” price point) was relatively easy and done all via word-of-mouth.

How did I know Baremetrics would solve a major pain? Or more applicably, how can you know if your product solves a major pain?

The most efficient way I’ve found is talking to real, live humans. Not blogging. Not tweeting. Not shooting a mass email out to a list asking what problem they want solved.

Then, you launch something as quick as humanly possible. Baremetrics was built in 8 days and the first $2,000 in monthly recurring revenue came from that.

You then iterate based on the feedback you get from paying customers. Can’t get anyone to pay? It’s possible you haven’t solved a legitimate pain. Money is the only validation at this stage.

Once you’ve got some paying customers, you can start iterating on the pain point and expand from there.

I scrapped the entire first version of Baremetrics and started over 2 months after I launched. The new version provided much more value and I was able to do build the “right” tool based on the feedback I received from paying customers.

Within a month of launching that next version, I doubled recurring revenue. Baremetrics solved an even bigger pain at that point.

For your business, maybe you’ve got a few paying customers. Maybe feedback overall is generally positive. But things are moving slow. What can you do?

You’ve got to get to the root of the pain. Maybe you’re partially solving their pain, so what can you do to fully solve it? If you’re automating something for them, maybe you haven’t completely automated it and so they’re using you to save a little bit of time when in reality you could be saving them a lot of time.

You have to dig. You have to get on the phone and talk to your customers (current and potential).

That’s the hard part and it’s why most businesses fail. They assume. Making assumptions about business pain is like a surgeon assuming which limb needs to be amputated. The wrong assumption will have a detrimental outcome.

What are you going to do today?

So put this to action. What are you going to do today to reduce pain for your customers? What can you change about your business in the long run to make “pain reduction” a core focus?

As usual, if you have any questions about this and how to do it for your business, please reach out (contact info below). I’m happy to help however I can.