If recurring revenue is a rainbow leading to a pot of gold, then churn is the dirty leprechaun trying to keep it all from you.

Okay, so my rainbow leprechaun metaphor is a little weak, but you get the idea. SaaS products are amazing because of how recurring revenue has a compounding affect. That $100/mo customer keeps paying…over and over again. Until they don’t. And that’s where churn comes in and why it’s so vicious to the growth of a company.

I’ve written before about how to reduce churn in SaaS, so I won’t rehash that here. But what I want to talk about is how we, in the past few months, reduced churn by nearly 70%.

We’ve certainly seen business with much worse churn, but neither number were acceptable and they were just making it harder to grow. The problem was, we just didn’t really understand why this was happening.

So, at the end of February, we started Operation Churn Reduction™.

But what did we do to reduce churn so much?

How we fixed it

We needed to fix our churn problem ASAP, so I didn’t write any content on the blog for all of March and ignored most email and phone calls that didn’t have a direct correlation to us figuring out what was wrong. Then we did three things over the course of two months.

The very first thing we did was remove the ability to cancel your account yourself. I know. Gasp! Heresy! Treason! But the reality was, our free-form “let us know why you’re canceling” text box wasn’t cutting it. We just weren’t getting anything remotely useful when it came to understand exactly why people were canceling.

Instead, when someone wanted to cancel, we just made it really easy to contact us. You could live chat with us on the spot or send a message to us directly from in the app. Most of the time, we’d respond in a couple of hours, sometimes within minutes (or instantly, in the case of live chat).

At that point, we’d say something to the effect of…

Hey Sue, happy to take care of that for you! Before we do that, would you mind letting me know why you’re canceling? Would love to learn how we could have served you better.

The large majority of the time, we’d get great feedback about exactly what was going on and why Baremetrics wasn’t a good fit for them any more. We’d then promptly cancel their account (and many times refund them) and wish them well.

But! Where this gets really interesting is that we were able to save about 15% of cancellations from actually canceling at all!

These were people who didn’t realize certain functionality existed already or that we were about to launch the very feature they were looking for. In some cases we’d offer a discount on their next month of service to tide them over while we finished up what it was they looking for.

These were the same people who would just put something to the affect of “Didn’t fit my needs” in that cancellation text box and we’d never hear from them again.

Definitely a huge win for us on both understanding the “why” but also actually saving a substantial number of customers from churning at all.

Now, the common assumption here is that making users contact you to cancel will result in lots of angry customers beating down your door and setting your house on fire. For us, this hasn’t been the case at all. There’s been literally one person who was slighlty upset, while many more actually used contacting us to cancel as a way to thoroughly talk through how they wished we could have served them better.

Talking with a number of other companies that do this, their experiences have been nearly identical. I can see this not working well with a B2C product, but with B2B I’d suggest trying it for even just a few weeks to get some solid feedback on why users are churning.

There were a couple of features that users had been requesting for quite a while and we buckled down and made those happen.

One was Plan Insights, which lets you see a breakdown of all your metrics on a historical basis.

The other was Data Intervals, which let you group your metrics by day, week and month.

Both of those were quick responses to what we found through cancellation feedback: that users were having trouble digging in to their data and understanding it.

Another piece of feedback from users was that they didn’t know what to do with the data, so we started spending more time educating customers.

A few of the ways we invested more time on education:

Why it’s so crucial to reduce churn

I can’t stress enough that you have to reduce your churn. It’s a literal cancer to your revenue growth.

Just by reducing churn, not even increasing our revenue growth rate, the outlook is much different. Taking that same example, but reducing churn to 5%, our MRR after 12 months is a much nicer $62,000.

If your churn isn’t in the single digits, it’s absolutely the only thing you should be focusing on fixing right now. 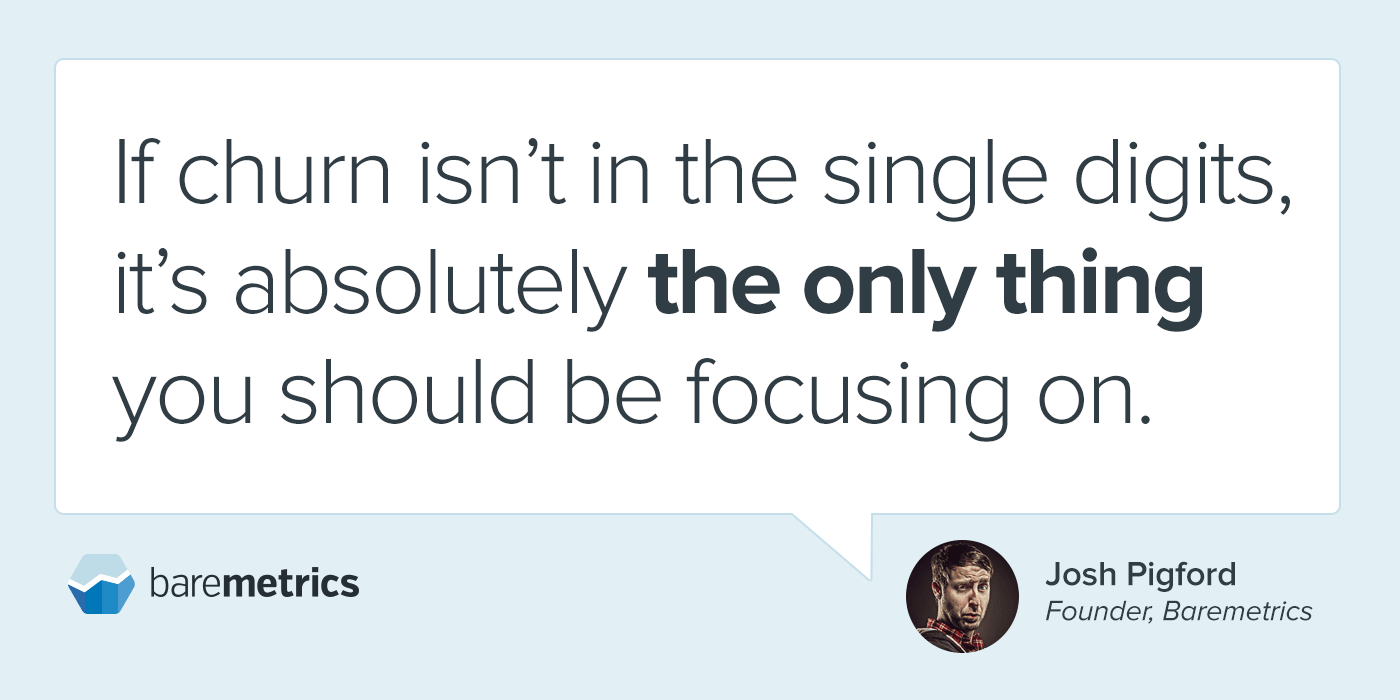 What are some things you’ve done to reduce churn? Need help reducing your churn? Post in the comments about what you’re having trouble with and I’ll be happy to help!