Hypefury is a SaaS tool in a very competitive space—social media marketing.

The list of social media tools for analytics, publishing, automation and engagement is long and seemingly never ending with new companies popping up every week. Plus, there are a handful of really popular (and well funded) companies that dominate.

With all that, Hypefury managed to get a slice of the pie and the business recently hit a huge milestone—$10K MRR!

I found the Hypefury story particularly interesting because I used to work in their industry, so I know just how competitive and difficult it can be to stand out.

Plus, the fact that they’re an Open Startup and a Baremetrics customer made it even more appealing. So I connected with one of their co-founders, Yannick, to learn more about how they took Hypefury from an idea to a growing SaaS company in an ultra competitive industry.

You can read his story below, plus my takeaways. Enjoy!

Want to grow your business (the smart way)?

Hypefury uses Baremetrics to analyze churn, revenue and other critical growth metrics. Want to join them?

Hypefury helps solopreneurs save time and automate their social media experience. Before getting the idea for Hypefury, my co-founder, Samy Dindane, started his first side business helping busy men get in shape.

He learned a ton and met a lot of people on Twitter. That’s when he asked this question:

Are there any scheduling apps that do Twitter threads?

Turned out there weren’t any solutions, but it was something that people wanted. That was the moment we knew there was a market for it and started working on the product.

Hypefury started out as a simple “scheduler” but quickly transitioned into an automation tool. 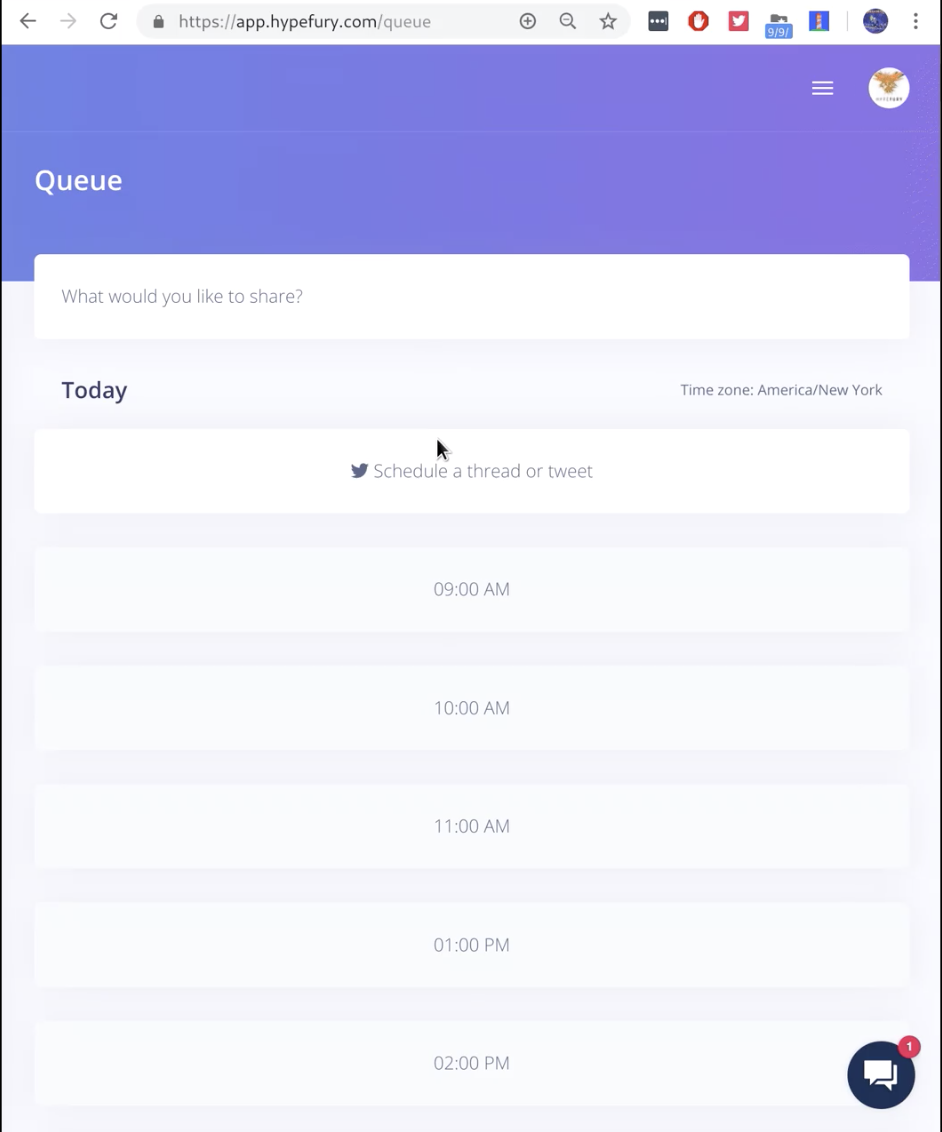 We’re very much focused on Twitter and go an inch wide but a mile deep. Twitter will probably stay the platform we keep our focus on while we extend the platforms our customers can schedule posts to.

Sometimes you don’t have to be the biggest player in an entire industry. Instead of trying to make the “best social media tool” that served every social network, Hypefury zeroed in on Twitter automation. And to take it one step forward, their initial differentiator was the ability to schedule Twitter threads, which nobody else was doing at the time.

Find a specific problem you can solve in an industry and become the go-to solution for it.

How we funded Hypefury

Hypefury is a self-funded business. The expenses to start an online business these days are not a lot.  We used Google Firebase for our app and affordable WordPress hosting for our marketing websites.

You can get credits for different services you use like Firebase and there are many startup plans you can take advantage of like Intercom’s.

Once we had a bit more room in our recurring revenue we started hiring people. Neither Samy or I take any salary yet. Otherwise we couldn’t grow the business as fast as we want. Our first hires were more developers.

We’re in a competitive space and we needed to stay ahead of the competition. As our customer base grew we couldn’t keep up with the support tickets and hired a customer success person. That first hire wasn’t a good match. Luckily we met someone during our journey who was interested in helping us with customer success. He turned out to be a great fit.

One of the benefits of starting a SaaS company today is it doesn’t cost as much as most people think. Hypefury was able to bootstrap by taking advantage of lower cost tools and not growing beyond their means.

Think about the resources your business needs in order to function, and avoid spending money on unnecessary tools or hiring too fast. Be willing to sacrifice upfront for the long term benefits.

Would people be willing to pay?

We didn’t explicitly ask people if they were willing to pay for Hypefury, but we knew Buffer and Hootsuite were huge companies building generic schedulers. We could carve out a piece of that pie for Hypefury.

If people on Twitter were shelling out money for a generic scheduler, they would definitely want to pay for a Twitter-specific version that met much more of their needs.

After just a couple of days, the MVP was ready. Samy invited about 10 people to the closed beta that expressed interest from his initial Tweet about scheduling Twitter threads. Those first couple of users were excited, became fans and helped shape Hypefury in its early days.

They shared ideas on how to improve the product.

And they helped us validate our own ideas for new features. 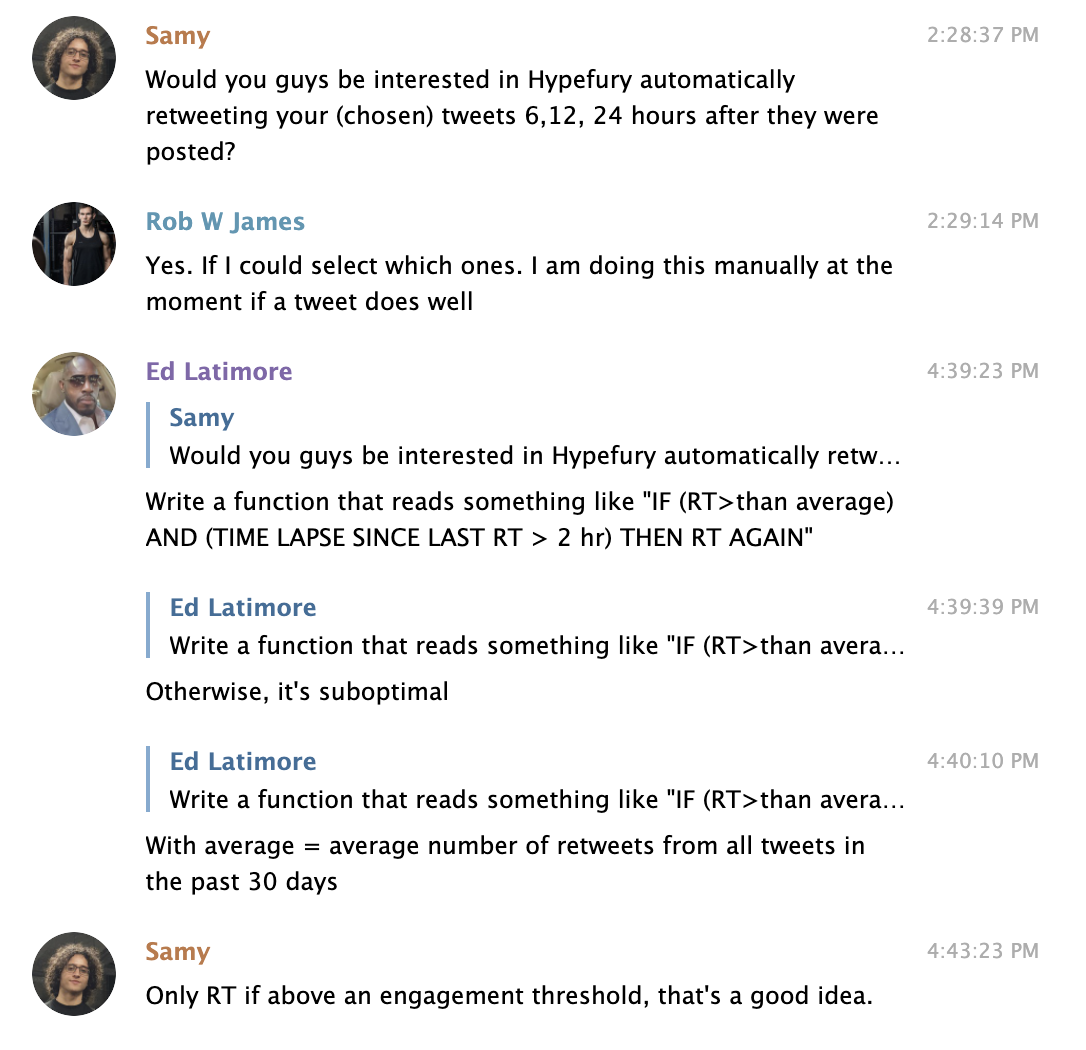 During the closed beta, Samy kept releasing new features and mentioned them on Twitter. The buzz started and more and more people got excited about wanting to use Hypefury.

If you want to find out whether or not people are willing to pay for your product, get some initial users and learn from them. They’ll become your sounding board for whether or not you’re building something people value.

This is particularly helpful if you’re nervous about charging for your MVP yet.

Deciding how much we should charge

Because there’s a pretty big market for social media scheduling and automation, we compared our pricing to businesses like Buffer and Hootsuite.

We haven’t changed our pricing yet in over a year and are now in the process of adding new tiers and changing prices based on how much value we bring.

We also based our pricing on intuition. We compared Hypefury to other existing tools and to what the market usually spends (for example, the price of the scheduler compared to the price of an ebook).

Our main value when we started out was to save people’s time. We’re now transitioning into a business where we also drive more and more revenue for our users though Hypefury.

Pricing is always a tough decision, but it doesn’t have to be. Hypefury looked around at what similar tools were priced at and went for it.

The market will let you know if you’ve priced your tool too high or too low. Check out our SaaS pricing guide for more tips on how to choose the right pricing model.

How we got our first 100 customers

After that initial beta group of about 10 people, Samy invited over 50 or so more people to try Hypefury. Twenty of those kept using the product so he knew he was on to something. Their word of mouth became a catalyst to get to our first 100 users.

After the initial 100 customers, we implemented an affiliate program that started the second wave of growth.

We’re on a viral platform and if we keep delivering our users with great value, they’ll keep talking and mentioning us. Having an extra financial incentive adds to that viral coefficient. People talk about us even quicker 🙂

We also launched a free course on how to build a Twitter audience. Anyone who downloads the course is added to an email funnel where we get people interested in using Hypefury.

Here’s an example email from the funnel. We try to make a connection with the people and also try to gauge what they think is important. 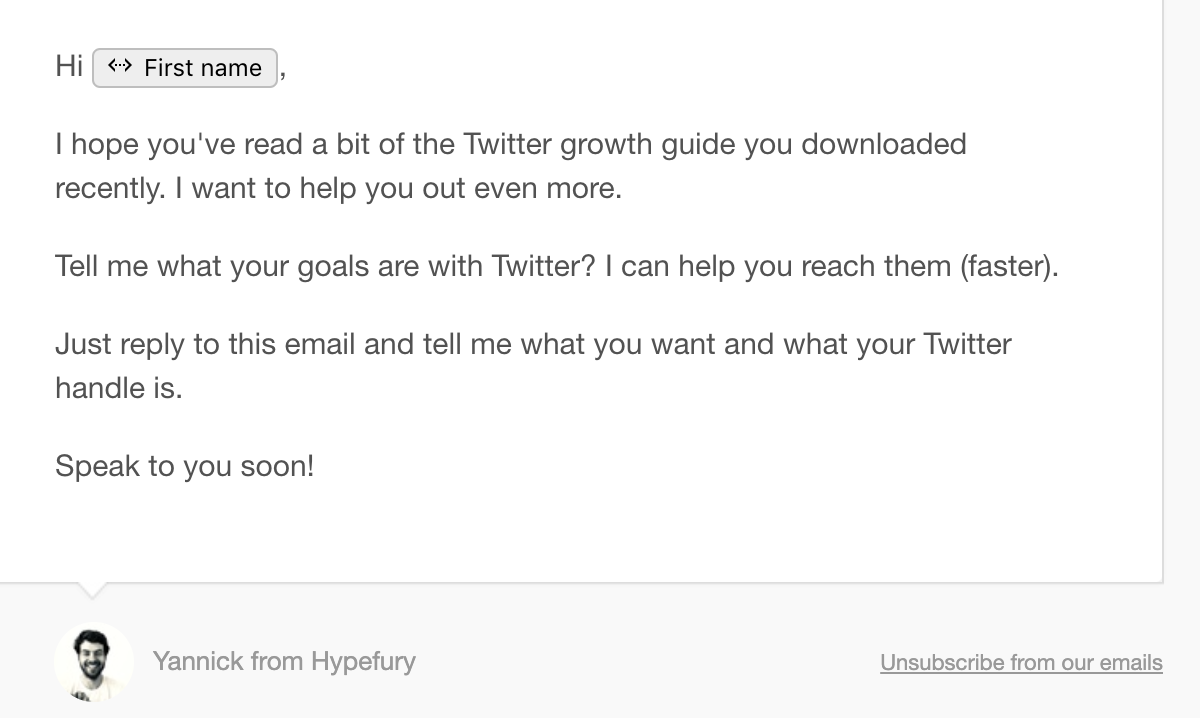 We create blog articles around the biggest topics in our niche and pay a lot of attention to SEO so we can grow our traffic numbers from unpaid sources.

Recently we started a podcast where we interview interesting people on Twitter. The podcast is geared towards people who want to grow their audience and business through Twitter.

A lot of our current users have interesting stories. We give them a platform for their story and they tell our (and their) audience how they use Hypefury.

Getting your first customers is one of the biggest challenges SaaS companies face. In the early days, building buzz through word of mouth is usually the most cost effective way to get initial growth. But you shouldn’t just rely on one growth channel.

Our biggest challenge was what to choose to prioritize. We had many different users who all had other wants and needs.

We didn’t really have a system in place to choose what to focus on so we just did a lot of requests. We decided to start using Acute as a way to gather feedback from our users and to gauge what features would have a bigger impact and were less time consuming to build.

As your SaaS company grows, you’re going to face new challenges. The faster you can put systems and processes in place, the fewer headaches you’ll have down the road.

How we measure our success (and what’s next)

Beyond that, our two most important metrics are Daily Active Users and average number of tweets scheduled.

We’re now focussing on getting new users to schedule at least 10 tweets within the first few days of starting their trial because it’s a good indicator of becoming a paid user.