What is Net Promoter Score?

NPS (or Net Promoter Score) is a powerful metric that helps measure and predict customer loyalty. It was created in 2003 by management consultant Fred Reichheld. He wanted to find the most predictive metric of measuring future customer loyalty, and after asking a variety of questions, settled on the NPS survey we all use today. Because the survey provides actionable feedback, is incredibly simple to start, and is one of the best predictors of future growth, NPS is often referred to as “The One Number you Need to Grow“.

You can find your NPS by asking customers one simple question: How likely are you to recommend [company] to your friends or family?

Customers answer on a scale from 1 to 10, with 1 being not likely at all, and 10 being extremely likely, just like in our example below. Most surveys will include a follow up question as well: What is the most important reason for giving the score that you did? 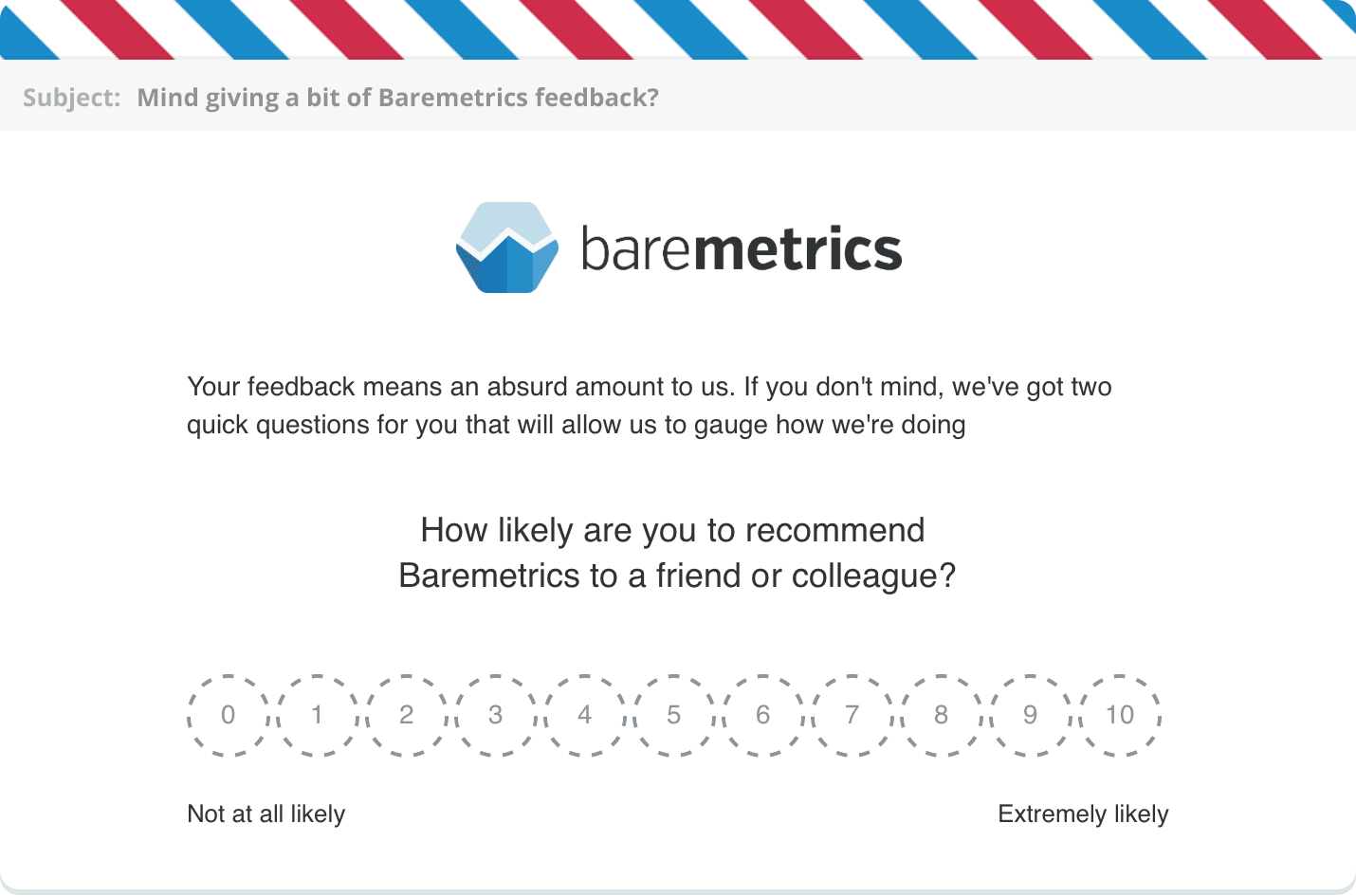 Respondents are divided into three groups based on their response:

Promoters (answered 9 -10) are the most loyal and likely to keep purchasing from you in the future. They are also (obviously) the most likely referers of new customers.

Passives (answered 7-8) are not enthusiastically happy, but not unhappy either. Passive customers could potentially churn if a competitive offer arose.

Detractors (answered 1-6) are at the highest risk of churning. They could also damage your brand by spreading negative reviews by word of mouth.

Why measure your Net Promoter Score?

Most companies want to be able to predict future actions of customers. Will they continue to subscribe? Or are they already one step out the door?

NPS is one of the most accurate ways to determine the future actions of your customers because it’s based on the likelihood of referrals. Recommending a company to a friend means that you’re putting your reputation on the line. If you’re fiercely loyal to a brand, you’re much more likely to risk your reputation with a friend by recommending them. There’s very little chance it would backfire!

Knowing which customers are loyal and which are about to churn means that you can target them with the most appropriate action. Plus, loyal customers don’t just keep buying from you – they also refer you to their friends, creating a new source of revenue. Measuring your NPS, and striving to improve it, is a sure-fire way to increase revenue and decrease churn.

NPS varies widely depending on the industry, type of customer and country or region. While the most important thing is to always be improving your own NPS, it is nice to compare yourself to other high performing companies. NetPromoter.com reports the average NPS for software companies as a solid 28. Here’s a few other example of SaaS companies:

NPS is a relational metric. That means it’s representative of the entire relationship between you and your customer – rather than reflective of a specific transaction. Instead of using NPS after a customer support interaction, you’ll want to survey customers at unrelated times. Otherwise, the NPS response could be overly biased by their most recent interaction with your support agents.

You can choose to survey your entire customer base at specific intervals, or ask customers at specific points in their lifecycle (onboarding, post renewal, etc). For example, Agency Analytics sends one email survey out 45 days after signup, and then repeats every 6 months after that.

We use Promoter.io to send out email surveys to customers, but there are many NPS survey providers out there (such as Wootric, which creates in app surveys).

In our next Academy article on NPS we’ll cover how you can automate your feedback program and work to improve your NPS.