How we doubled our trial conversion rate with in-app messaging

For the first year and a half Baremetrics didn’t have a free trial at all. Want to try us out? Money please! 💰

Back then only a very narrow band of businesses could use Baremetrics. You had to be using Stripe and its subscription API correctly. As many as 50% of signups were not compatible, which turned me (the support person human man) in to the bringer of disappointment and refunds.

So we did what countless other SaaS businesses were doing. We added a 14 day trial and set up a drip email campaign.

For the next year or so, we iterated on that drip email campaign.

Every customer received the same email regardless of which features they’d already explored on their own, or whether or not they were actively using the trial.

With each iteration we thought we were moving the needle in the right direction, but we had no way to know for sure. We (perhaps wrongly) assumed that our new ideas were better than our old ideas. We also didn’t have a great idea of what our trial conversion rate even was.

Late last year we rolled out Trial Insights and saw for ourselves for the first time that our trial conversion rate was decidedly not great.

Even when accounting for incompatible signups, we were converting at best 15% of eligible trials. Yikes.

We had some ideas for how to improve the conversion rate, but this time we wanted to be certain that the new ideas were better than the old.

Intercom makes it easy to A/B test individual messages, but not entire campaigns. So I had to dream up a way to make it possible. 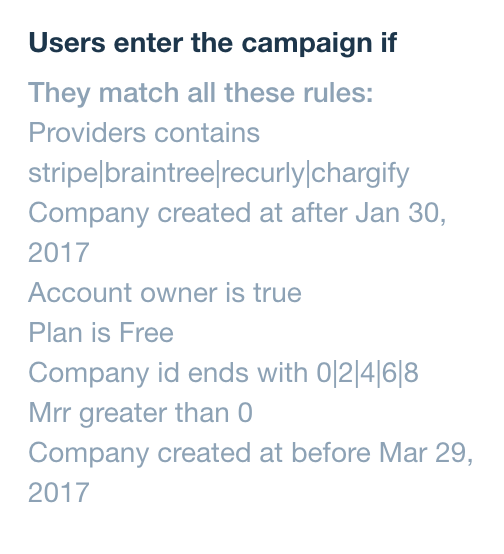 A little-known Intercom trick is that vertical bars “|” within attributes act as an OR statement. So while someone must match all of the above rules to join the campaign, their ID can end in 0 OR 2 OR 4 OR 6 OR 8. Neat, eh?

Want to learn more about using Intercom Campaigns? Check out our super duper extensive guide on the topic: The startup guide to growing your business with Intercom.

We had a hunch that moving the bulk of our on-boarding activities from email to in-app would drive conversions. In a previous experiment, we increased annual upgrades by 30% by using in-app messaging.

We broke down the new campaign into two separate message types.

These messages were tailored around what people were actually doing in Baremetrics.
In contrast to the drip email series, we highlighted cool features and useful content while folks were using and thinking about Baremetrics.

Here’s an example of a message a customer receives while looking at their churn rate if it’s in the double digits. 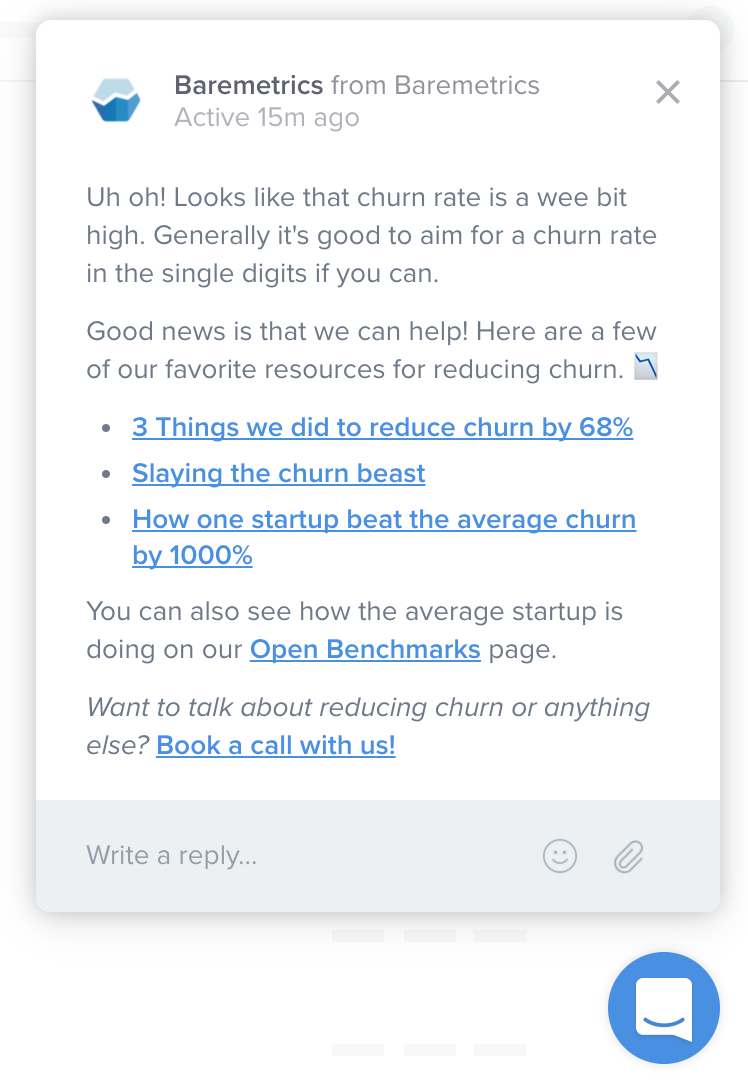 We also encourage setting up a call or 1:1 demo at every opportunity. We had found in previous testing that about two thirds of everyone who received a demo converted to a paying customer. So every message concluded with a “Want to learn more? Sign up with a demo” message.

Instead of using emails as a random way to let you know about features, we switched their use solely to keep folks engaged with Baremetrics during the trial.

Haven’t logged into Baremetrics for 24 hours? You’re getting an email! These emails focus on features that we know to be both exciting and sticky as a way to get the person interested in signing back in.

Here’s an example of one of the first reengagement emails we send. This one performed quite well because Business Insights is designed to help people get more out of Baremetrics. 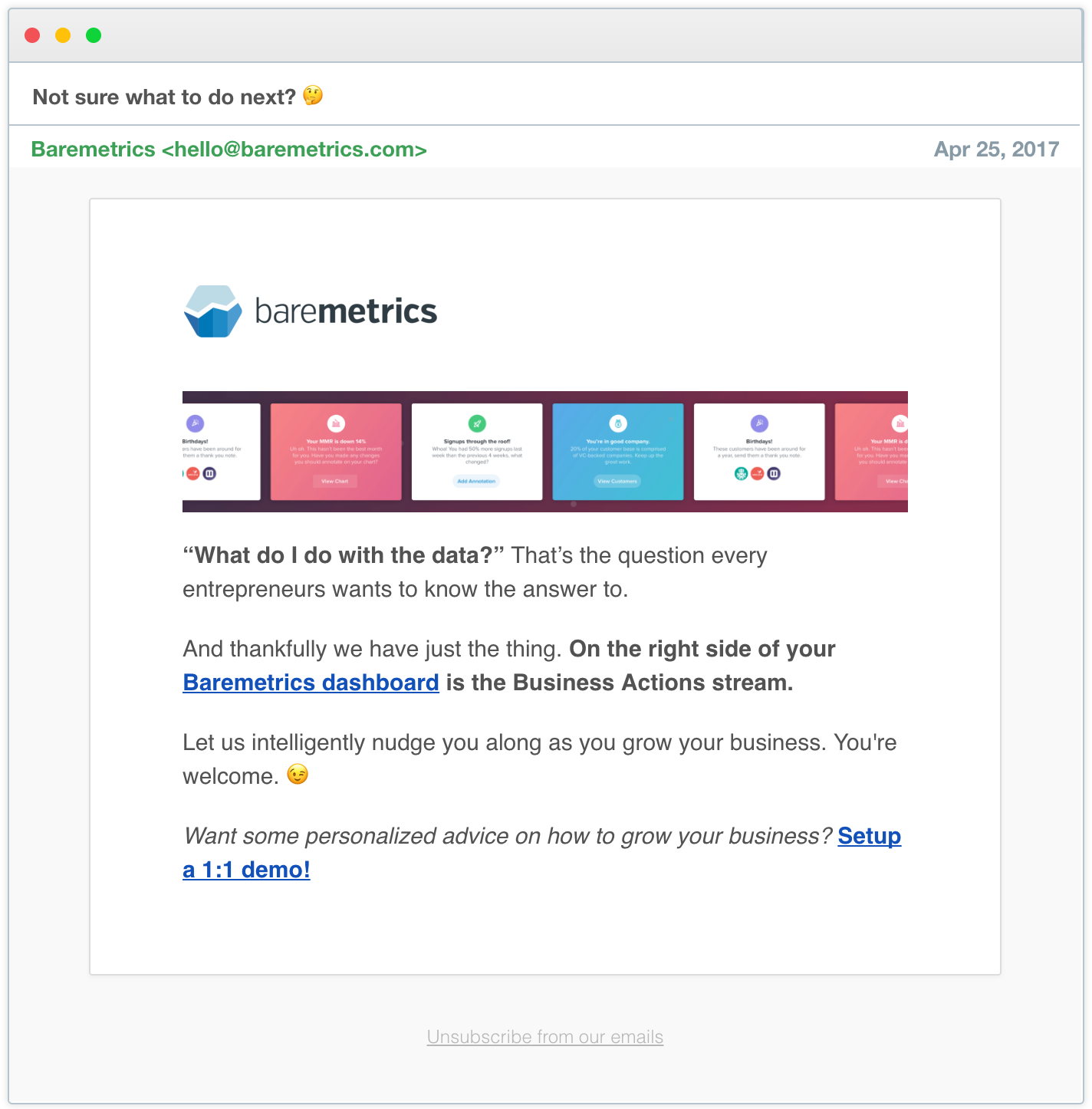 But again, the kicker here is this only gets sent if your use of Baremetrics has dropped off during the trial period. That’s crucial because, otherwise you over-message users at a sensitive point in their lifecycle.

The results of this test were pretty mind blowing.

We increased our trial conversion rate from 15% to 31%.

We helped twice as many folks to sign up by highlighting value and offering help while they were actually using Baremetrics. And when they weren’t using Baremetrics, we consistently reminded them why they come back.

Our original, email-only incarnation was as many as a dozen different emails based on activity, which is crazy. The new campaign actually has 15 different messages, but instead of all emails it’s a mix of in-app and emails and, again, it’s all based on activity (or inactivity, as it were), with the average person only receiving a handful of messages at all.

In hindsight, the results should have been obvious. Telling someone about a feature of your product in the same context as an email from their mom about Thanksgiving dinner hardly seems efficient. But re-engaging (email reminder) and then offering up a tip on getting more value out of the product (in-app message)? Spot on.

How have you increased your trial conversion rate? Have you done similar testing at your company?