Our 7 day launch sequence for announcing anything

If you launch something on the internet and no one is around to hear it, does it make a sound? I know. Deep. But seriously, how do you launch/release/announce/publish something and make sure people do in fact hear?

Here at Baremetrics we have a launch sequence that we use variations of for basically anything we put out: articles, products, features, news…anything. It’s a repeatable set of steps done over 7 days and one we’ve been optimizing over the past couple of years and one you can likely copy and use for your own company! Who doesn’t like copying?!?!

Not all of these items will be applicable to everything you put out (you wouldn’t do a press release for a new blog post).

Note: I’ll be using the words launch, release, publish and announce interchangeably here but ultimately I’m referring to “getting something out there”.

Whether you’re publishing a new article or releasing a major new feature, you need to give yourself a little lead time to get your ducks in a row.

Usually, one week out is sufficient. If it’s something just absolutely huge (initial product launch, for instance), then two or three weeks would be more appropriate.

Now, for the 7 day launch sequence!

Write out the story you’re telling

When it comes to features and products, everything you do needs a story behind it. The mechanics of the thing you’re releasing aren’t the story…the problem you’re solving is where things get interesting.

What you write for this isn’t necessarily something you’ll publish directly, but it helps focus how you present things, the copy you use on landing pages, what you pitch to PR folks, etc.

Not all things you put out will warrant a PR push, but if you can put a compelling spin on what you’re doing, getting some press coverage can go a long way.

There’s not really any magic sauce for getting the press to cover you. So much of what does/doesn’t get covered boils down to the whims of the reporter and what else is in the current news cycle. Your best bet is to just cast the net wide and hope for some bites.

Some tips for doing press outreach:

Some of the things you may launch likely involve another company in some form or fashion. Start coordinating announcements or guest posts now.

For example, when we launched Open Startups, I worked with our pals at Buffer to do a guest blog post for them, which gave Open Startups a huge boost and got it out in front of a much larger audience.

When we launched our Slack App, we worked with the fine folks at Slack to be a featured app in their directory.

If what you’re launching makes use of another company’s technology, they’ll likely want to help you promote it. Case Studies are a great format for this and something we did with Clearbit.

Video is a great format to show off a new feature and give a bit of backstory on why you created it. We try to create short demo videos for both landing pages and general sharing for any major feature we release.

You can see some examples videos here…

These videos don’t need to be complex or overly polished…the more human they are, the better.

When you’re launching a new feature, having a direct landing page is crucial. It allows you to reference a feature from the perspective of “solution to a problem”.

It’s also the perfect segue to a call-to-action (such as starting a trial or subscribing to a newsletter). 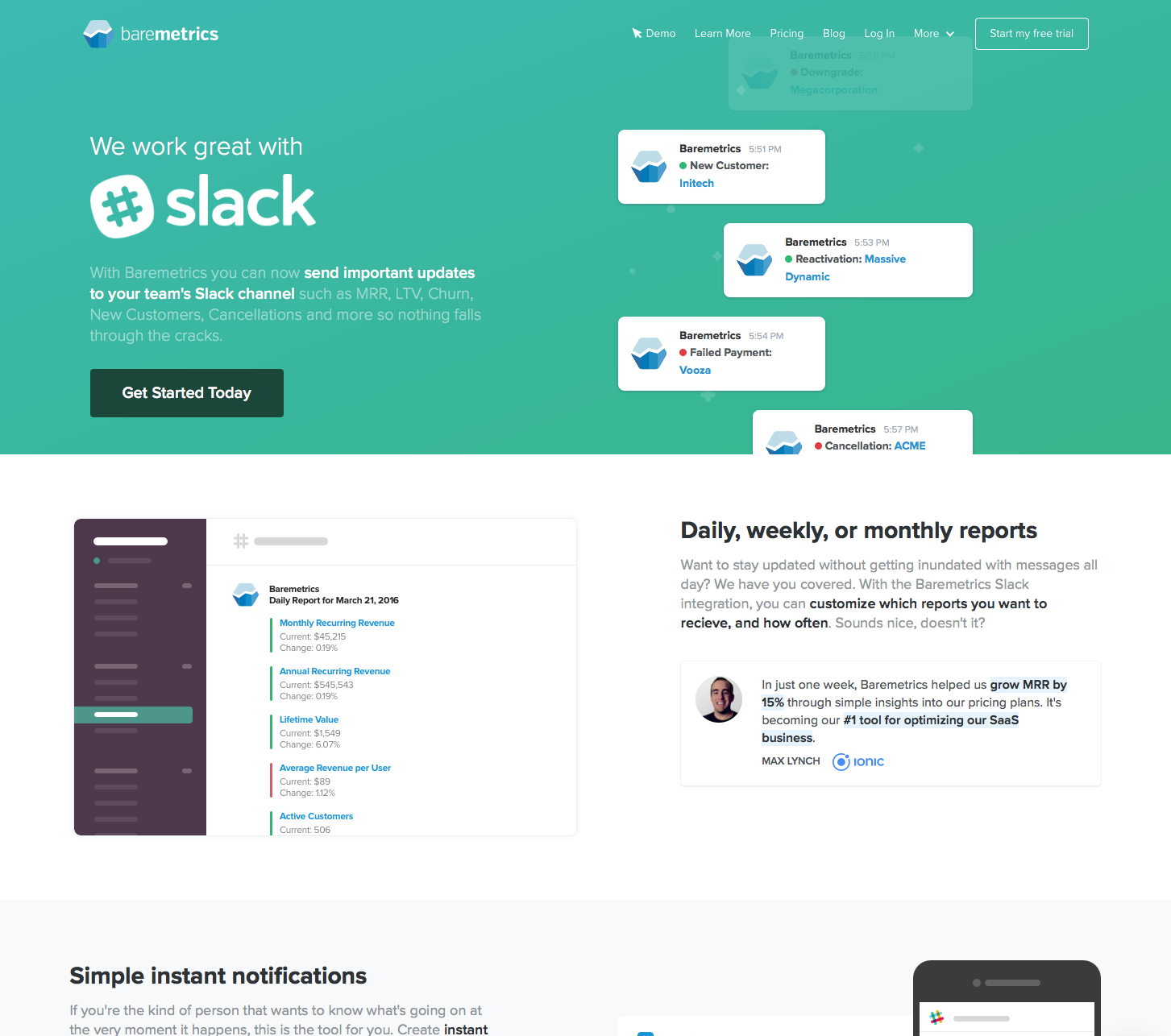 We create landing pages for everything under the sun. Here’s a handful of them to get your creative juices flowing…

The key to getting a response to anything is in the follow up. Send a follow up email to all the journalists you reached out to a few days ago. Trickle out a little more info about what you’re doing and why it’d be super interesting to them and their readers.

Your goal here is to get some commitments to cover what you’re doing and to get them to write something the same day or the day after you launch.

Creating shareable images and animated GIFs goes a long way towards getting additional traffic from social media. They’re also a great way to quickly show off new features to your customers in-app.

We’ve got an entire guide to creating animated GIFs, and our pals at Buffer have an amazingly thoroughly guide to properly sizing social media images for various platforms.

You don’t get what you don’t ask for. Most people don’t mind you reaching out and asking them to help share something that you’re launching in a few days.

There are a couple of big kickers here, though…

Whether it’s just a regular blog post or an article about the release of a feature, having it written a few days ahead will give you time to tweak the content and make sure it’s as error-free as possible.

The day before the launch is all about relieving launch-day duties. Pre-schedule as much as you can so you aren’t drowning in todos.

Ideally you’ve got an email list that you can send announcements to. A blog with regularly posted content is a really great way to build up a list that will pay dividends in the long run.

We’re big fans of in-app messages. We use them for all sorts of things (like increasing annual upgrades by 30%)! We also use them for major announcements.

There are a number of tools for sending in-app messages…Intercom is our weapon of choice. 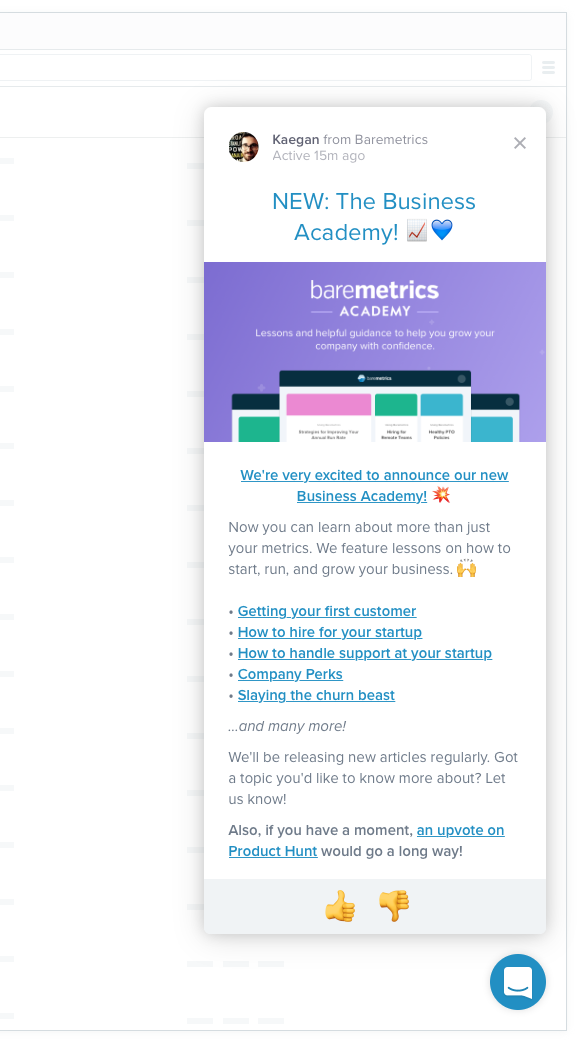 Queue up social media posts to go out throughout the day using variations of images and bits of content. On a typical launch day we’ll post to social media 10+ times with different pieces of content.

This is also the time to schedule additional posts throughout the coming weeks and months so coverage doesn’t just fall off a cliff!

Deploy, merge, pull, click, publish! Do all the things that make the things do things!

Follow up with those “influencers” (i.e. internet friends) who’ve agreed to help you spread the word and let them know everything is live and that they can share to their heart’s content!

Submit to Product Hunt (and/or other communities)

Not everything is worth submitting to Product Hunt, but it can be a huge influx of traffic for the right product or feature. I suggest submitting it first thing in the morning (by 8AM EST).

We’ve had pretty great success with it, especially for free tools we’ve put out such as Open Benchmarks, Build vs. Buy Calculator and The Business Academy. Here’s a full list of all the things we’ve had on Product Hunt over the past couple of years.

Depending on what you’re announcing, there are likely other communities such as GrowthHackers or Hacker News that are applicable.

Finally, after you’ve put everything in motion, if all goes as planned you’ll spend the rest of the day interacting with the community and everyone’s response to what you’ve just put out.

You should respond to blog comments, social media, emails, etc. quickly to keep buzz going as long as possible.

Making it your own

We do variations on these launch steps for nearly everything we put out. And while we’ve been using this for quite a while, we’re constantly making little tweaks to it.

Try all the things we’ve mentioned, figure out what’s worth your time and effort and come up with a repeatable plan so you squeeze every last drop out of everything you put out!