One easy way to do this is to use Baremetrics to calculate the growth rates for your SaaS metrics. Get on the Baremetrics free trial, and check out what it looks like!

Here’s an example of calculating the ARPU growth rate with Baremetrics:

You can see the ARPU growth rate automatically displayed in green under your ARPU amount.

What is a Growth Rate?

A growth rate is a term that describes the change (in percentages) of a variable over a specific period.

i. Growth rates in population

A growth rate shows the percentage increase of a value, such as a population, over a given period of time.

Growth rates can also be applied to personal finance. For example, the growth rate of our savings was 20% year over year. That means the amount of money we have saved this year is 20% more than last year.

Growth rates are also popular when looking at how businesses grow or change. If you’re considering whether or not to invest money in a certain area of business, you might want to look at how that area of business is growing.

With an understanding of a company's growth rate, investors can often predict future performance and make better investment decisions.

For example, you might look at the revenue of the business. Is the amount of revenue increasing? If it is, that might be a good indicator of potential. 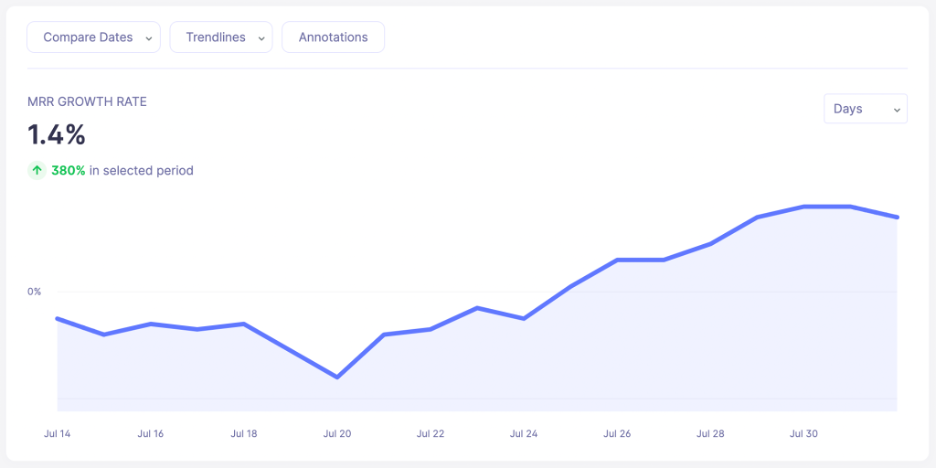 What is the Growth Rate Formula?

The Growth Rate formula is:

What are the most important growth rates in SaaS?

The most important growth rates in SaaS include:

The values from these metrics give SaaS businesses a hands-on understanding of their financial health and projections for future growth. Even better, these growth metrics can be weighed against industry benchmarks to analyze growth within the proper context.

What growth rates can you measure with Baremetrics?

Growth rates are an essential yardstick in measuring your business’s profitability and sustainability. This measure helps all interested parties understand the speed at which a company is growing and helps leaders make projections for the future.

With Baremetrics, you can get a bunch of growth rates for your metrics.

1. The growth of active users

Of course, all users are significant. Users on free trials may eventually become paying customers. Still, keep in mind that it’s the paying customers that keep the lights on. Knowing how your active customers are growing is a good indicator of your company’s health.

Here’s an example of monitoring the growing number of active subscriptions to your SaaS:

The monthly recurring revenue is the total revenue gained from your business every month. One-off payments like setup fees or consultation fees are not part of the MRR. The revenue counted as part of the MRR is recurring payments, such as a monthly subscription.

The Baremetrics MRR tracking shows you the growth rate of your monthly revenue. You’ll be able to compare MRR from different months and see if it’s increasing, decreasing, or just remaining constant. If you have a substantial decline in MRR, it could indicate that your customers are churning at a higher rate than usual. Do you need to increase your efforts at bringing new customers?

A clear understanding of your sources of revenue and the data from your MRR can give you an added advantage in creating a growth strategy. You’ll also need to know what channels to persist on and which ones aren’t bringing much ROI. As you may already know, MRR is not an independent metric, it’s interconnected with other metrics that aim to give you a holistic view of the financial health of your business. With Baremetrics, you can keep an eye on your MRR and its interplay with other vital metrics.

Churn rate is the percentage of revenue or customers lost within a given timeframe. The most essential type of churn include:

Here is an example of the rate of change for churn:

And check out this example of revenue churn from the baremetrics demo page:

When your existing users bring in more revenue by upgrading to a higher plan or purchasing an add-on service from your business, the new revenue is the expansion MRR. You can also track this metric with Baremetrics.

Some businesses build their user experience to encourage expansion MRR, like upgrading from a user plan to a team or group plan. If your company has made plans for expansion MRR, you can take advantage of the Baremetrics tool and see if your efforts are paying off.

See all of your financial data with Baremetrics

Baremetrics provides a dashboard to track your financial data and its interplay with several other business performance data. Your company’s financial data is essential for several reasons. It provides a glance as well as an in-depth look at the overall health of your business.

Your internal team will also use your financial data to analyze business performance and determine whether tactics and strategies must be changed or improved.

In addition to giving you clear insight into your financial information, Baremetrics shows you how your company performs against industry benchmarks. Look at more of what the Open Benchmarks say here, or start a free trial today!