What Is Psychological Pricing?

While some psychological pricing strategies can be seen as manipulative, which might decrease sales in the long term as consumers see the company as dishonest, others are common price hacks that seem to be well tolerated by most people and effective.

Since no single pricing strategy is going to be sufficient in reality, the different forms of psychological pricing can all cooperate with your other pricing strategies, from bundle pricing to cost plus pricing, to ultimately optimize your prices.

Whatever pricing strategy you choose, use Baremetrics to monitor your sales data.

Baremetrics makes it easy to collect and visualize all of your sales data, including your MRR, ARR, LTV, and so much more.

Integrating this innovative tool can make evaluating your pricing strategy seamless for your SaaS company, and you can start a free trial today.

Psychological pricing comes in many forms, but all of them have one thing in common: they are tricks. Now, not all tricks are equal, and they aren’t always deceitful, but they do rely on knowledge about human behaviors to make a price seem a bit more palatable.

Let’s look at some common forms of psychological pricing.

If you like heading to the mall every weekend, then you’ve probably looked in the front windows of every shop and thought “do they ever not have a sale on?” This is the essence of artificial time constraints.

These shops are creating the illusion that the current prices are ending soon when in reality the prices will largely be static over time—that “Back-to-School” sale ends just as the “Halloween” sale heats up, which gets you to the “Turkey Time”, then “BLACK FRIDAY”, and “Christmas” sales, which lead right into the “End of the Year Blowouts.”

A newer form of this can be found online, where websites claim the product is offered for only a limited time, but of course that time limit is fake. 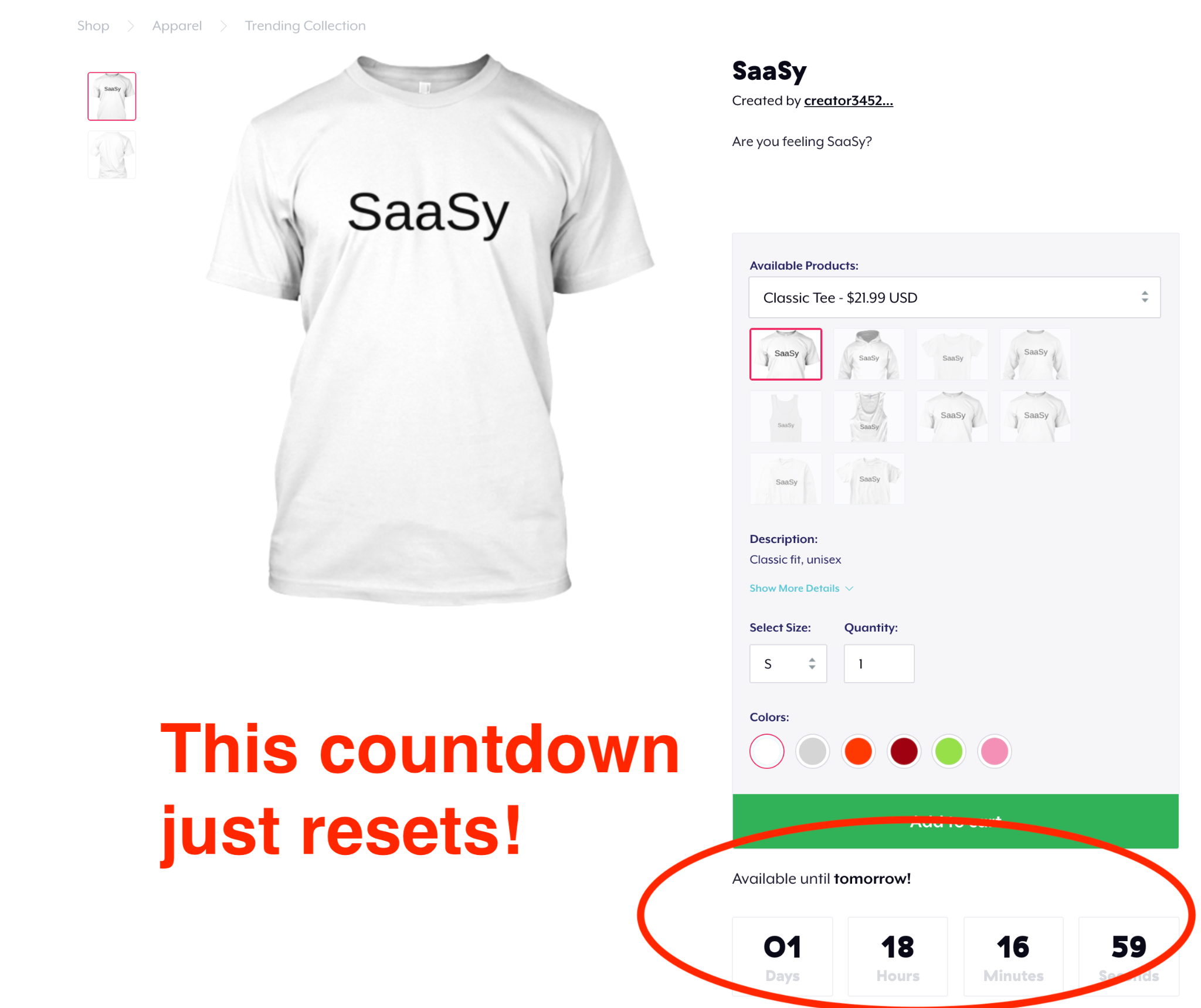 Don’t be fooled by the countdown; it just resets when it hits zero.

This is where everything ends “.99.” Researchers have found that, since people look at the price from left to right they have a “left-side bias,” which basically means that they don’t look at the numbers following the decimal point. A price of $1.99 is perceived by consumers the same way as $1 even though it is practically the same as $2.

Interestingly, the association of prices ending in 9s with value has led to an opposite effect where many people see prices ending in 0, or prices that do not have anything after the decimal at all, as prestigious. You often see this implemented at fancy bistros or restaurants.

Some psychological pricing relies on the fact that the average person has a tenuous grasp of math. Innumeracy (think illiteracy for numbers) is when someone has a lower skill level at math than is necessary to understand the difference between two numbers.

The classic example is when confronted with two sales, one stating “buy one get one free” and the other “50% off when you buy two items”, consumers think the former is a better deal than the latter.

While I’m sure every reader of this piece immediately saw those two sales are identical in volume and price, what if it were “buy two, get one free” vs. “30% off”? How about “buy one, get one half off” vs. “20% off”? The fact is, most people would need a few seconds to figure it out and might not take the time to decide.

This can be combined with artificial time constraints by making all of the sales practically the same final result but attractive to different people.

The way prices are presented can have a tremendous effect on the perceived cost of a product. Restaurants will use slightly smaller fonts for the price than the associated description to make the price appear slightly shorter, and therefore a smaller number.

You might have been in a store recently that uses a different color scheme for sale prices. For example, the normal prices are in black and white while the sales prices are in red and yellow. This naturally draws the eye to the sale items—which are precisely the items the store wants to sell you. Look closely at some of the sales too. Sometimes the flipped around regular price is the same or just slightly higher: regularly $8.99, now on for $8.96.

Finally, sometimes the cents are much smaller than the dollars to really drive people to think $8 when they see $8.99.

If you’re looking for a smarter way to measure the effect of a new pricing strategy, get in touch or sign up for the Baremetrics free trial today.

Have a look at the demo to see how Baremetrics can show you the results of your pricing decisions.

The pros and cons of psychological pricing

All pricing strategies come with their advantages and disadvantages, and psychological pricing is no different. Most patrons aren’t going to care if you charge $99 instead of $100, and they probably won’t consciously notice if you shave a half point off the font size, but going beyond that can really upset people.

Especially in SaaS, you want to nurture the relationship you have with each subscriber so leaning too far into the psychological pricing model could be trading a small short-term gain for a loss of consistent long-term revenue.

Let’s take a look at some of the specific pros and cons of psychological pricing.

A smarter way to approach your SaaS business

Baremetrics measures churn, LTV and other critical business metrics that help them retain more customers. Want to try it for yourself?

The advantages of psychological pricing

By offering constant sales promotions, you can expect to get more attention than usual. If you rotate among a few different sales promotions throughout the month that are effectively the same price but using different phrasing, for example “20% off” one week and then “Get three free months when you sign up for your first full year” the next week, you can expect to drive more customers to the sign-up page.

One of the great advantages of psychological pricing is that it helps customers make decisions. For example, if you have a three-tier pricing scheme on your subscription site, then, by creating a “10% off” sale for the cheapest tier, “20% off” for the middle tier, and “30% off” for the most expensive tier, customers immediately see the added value of the top tier and it reduces their mental burden.

If done correctly, all those psychological pricing tricks can add up to a higher return. Even if the prices are discounted more than you’d like, the added volume of a really successful sales campaign can add up to more money in the bank.

FOMO is real. This is coming from a board gamer who spends too much time and money on Kickstarter. (I actually ordered something in the middle of writing this… there was only 16 hours left!) If you can build that sense of urgency, while not overplaying it to the point it is no longer believable, then you can get people to make a purchase today instead of some day.

The disadvantages of psychological pricing

This is really the first, second, and third biggest disadvantages all in one. At its core, psychological pricing is preying on the fact that humans have evolutionary shortcomings in this high-paced modern world. While some of these tactics are so normalized as to be assumed, others are fresh, more powerful, and generally hated by anyone who notices them.

While running a campaign at the end of a quarter to meet your newest MRR target might not gain the ire of your client base, doing so constantly is bound to get people angry.

While having a “biggest sale ever” every day might induce FOMO in some potential customers, others might see it as an indication that your company is not doing very well—and therefore your service is probably not very good.

The way you price your service and the tactics you use to drive conversions can work both ways. You don’t want the psychology of your pricing scheme to backfire.

3. Not a long-term solution

Ultimately, psychological pricing is best used sparingly when you want to hit a specific short-term sales target. In the long run, building a relationship through trust and honesty with your clients is how you can maximize their LTV.

Baremetrics is the obvious choice for SaaS businesses seeking to better track their revenue while making major pricing strategy changes.

If you’re looking for a smarter way to approach your SaaS business’s revenue performance, get in touch or sign up for the Baremetrics free trial today.

Marketing channels are only as good as their results. Have a look at the Baremetrics demo to see which marketing and business insights Baremetrics can unlock for you.