They started a free trial of Baremetrics. Right away, the Baremetrics toolkit gave actionable insights about their Stripe data, automated their dunning campaign, and provided a process for collecting actionable feedback.

Within just one month of using Baremetrics, Sync with Connex has recovered $11,000 in failed payments and reduced billing-related support tickets by 20%.

Table of Contents
Background: A Need for Automated Data Entry
Hitting an Operational Wall: Why Sync with Connex Migrated from PayPal to Stripe
Baremetrics as a Solution for SaaS Analytics, Dunning, and Cancellation Data
Seamless Stripe Analytics
Recover to Prevent Failed Payments
Cancellation Insights to Understand why Customers Leave
The Future of Sync with Connex
Read More about Sync with Connex

Sync with Connex is a 3rd party integration tool that automates data entry between QuickBooks and e-commerce channels, payment processors, and shipping solutions.

Since launching in 2010, Sync with Connex has helped over 5,000 businesses simplify their workflows, prevent input errors, and repurpose precious time for more important tasks. 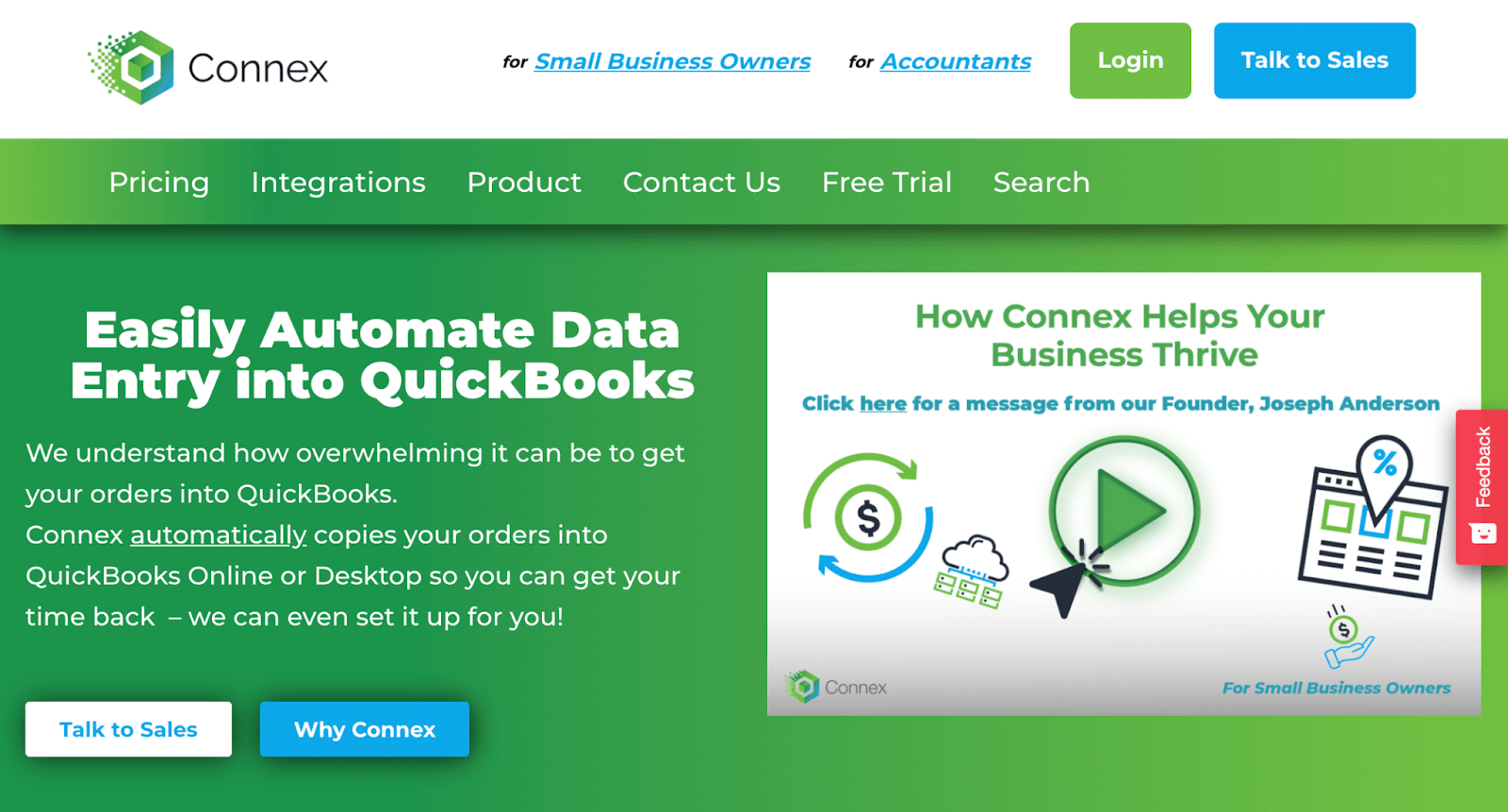 With over 14 years of experience in the e-commerce and SaaS industries, Sync with Connex is an indispensable tool for growing e-commerce companies.

Baremetrics spoke with Sync with Connex Founder and CEO Joseph Anderson to learn more about how they use Baremetrics to analyze Stripe data, recover thousands of dollars in failed payments, and learn why customers cancel to reduce churn.

Simply put, manual data entry stinks. It’s tedious, prone to human error, and takes tons of hours to do accurately. In fact, a 2020 international study found that it’s one of the most redundant and hated workplace tasks.

Despite this, many companies still rely on manual data entry to ensure information is shared between the right channels, including Joseph’s former employer. The company even hired an intern to type 100 orders a day into QuickBooks, despite employing over a hundred software developers.

For Joseph, the situation was inspiring.

“I thought, couldn’t one of them write software to automatically sync orders into QuickBooks?”

Joseph Anderson soon left the company to start what would later become Sync with Connex in January 2010. His mission was to make QuickBooks simpler to integrate with other software, and completely automate data entry for online e-commerce businesses.

“Business owners should focus on what they do best, which is selling their products and services,” Joseph said.

For SaaS products, building, improving, and maintaining software is one thing. Running a company is another.

After years of steady growth, Sync with Connex would run into challenges that would ultimately change the way they operated as a business.

Hitting an Operational Wall: Why Sync with Connex Migrated from PayPal to Stripe

Sync with Connex not only helped their customers do better data entry into QuickBooks, but they had to consider operational issues that included how  to best collect revenue from their own customers.

When Sync with Connex launched in January 2012, they started using PalPal to process their customers’ payments. Stripe, Recurly, and Chargebee were all fairly new products, and the PayPal platform allowed Sync with Connex to easily do what they needed to do: process payments from customers.

But aside from processing payments, PayPal offered little additional value for Sync with Connex.

They could create lists of customers and orders, but couldn’t access important customer details like what products they were using, how long they’ve been a customer, what plan they were on, and the terms of their plan.

““Looking back, it was like running a company with a blindfold on,” Joseph said.

The problem was, PayPal lacked the reporting tools he needed, and PayPal wasn’t planning on building new features. Joseph then tried building his own reporting tool on top of PayPal.

Founders with technical skills have a huge advantage. They can create the software they need at the fraction of what it would cost to hire talent.

That doesn’t mean it’s free, though. If time is money, when does it make sense to build a tool internally? At what point is it more economical to pay for a service?

In his case, spending over 80 hours on the project was the deal breaker. It just wasn’t worth spending so much time building a tool that wasn’t going to generate any revenue.

He then decided to migrate from PayPal to Stripe.

You can see the full guide on how he migrated customer data from stripe to data here!

Baremetrics as a Solution for SaaS Analytics, Dunning, and Cancellation Data

Stripe’s platform includes some analytics features, but they are limited to just five categories. On top of that, there’s no ability to customize dates, so users can only look at their data in fixed time periods like four weeks, one year, and two year periods.

Sync with Connex needed to go deeper in order to act on the data. Not only does Baremetrics calculate 26 base metrics (or up to 40 with additional features), users can view their data in customized time frames such as Last 30 Days, Last Month, Last Three Months, Last Six Months, Last Year, All Time, and more.

Joseph says his team check Baremetrics 1-2 times a day to keep a pulse on key metrics like Monthly Recurring Revenue (MRR), Customer Lifetime Value (LTV), and churn rate all in one place.

Before switching to Stripe and integrating with Baremetrics, Sync with Connex’s approach to dunning involved an in-house tool that would automatically turn off an account when its credit card on file failed.

The problem with this was that Sync with Connex customers often missed communications about their card failing. They then had no idea that their account was turned off, and were left wondering why their data had stopped syncing and why orders had not been fulfilled.

The software failed to cancel all users and some users were allowed to sync, if their payments had failed for several months. During the migration from PayPal to Stripe, Joseph recovered about $6,000 in one day of failed credit cards.

So when Sync with Connex started their free trial of Baremetrics, trying out Recover, Baremetrics’s dunning solution, was a no brainer.

Recover is the leading dunning solution for SaaS and subscription businesses. It uses a variety of tools such as customizable email campaigns, in-app reminders, paywalls, and credit card capture forms to bring back revenue lost from failed payments.

Best of all, Recover is easy to set up and is completely automated, which means you can focus on other things while it works hard for you.

Sync with Connex started using Recover in May 2021. In just 4 weeks with zero effort, they recovered $11,000 in failed payments. Billing-related support tickets have decreased by 20%, allowing both their customer success and engineering teams to focus on other projects.

In addition to failed payments, subscription businesses need to pay close attention to which customers cancel and for what reasons.

After all, these kinds of insights are essential for understanding how your product and services can improve.

Before Sync with Connex migrated to Stripe and integrated with Baremetrics, they were churning 30-50 customers every month. It was difficult to keep track of who was cancelling, as well as how much money they had spent with Sync with Connex.

They also lacked an efficient process for collecting feedback.

For these reasons, Sync with Connex decided to try Cancellation Insights.

Cancellation Insights shows you why customers cancel, and helps bring them back. The feature calculates lost revenue by cancellation reason, and automates smarter emails and forms to collect actionable feedback.

For Sync with  Connex, the insights collected by Cancellation Insights were immediately helpful.

Right away, they learned 3 important things:

The Future of Sync with Connex

To reach the next level of an eight figure company, Sync with Connex is streamlining their sales and support processes. They are making their software simpler to set-up, growing their team, and improving their user interface.

Since launching in 2010, Sync with Connex has made over $8 million in revenue with no outside capital. Their future is focused and bright.

Read More about Sync with Connex

To learn more about Sync with Connex, check out their blog. They have tons of expert information about integrating QuickBooks and taking e-commerce companies to the next level.

Joseph Anderson is the Founder and CEO of Sync with Connex, a SaaS company that automates data entry between Quickbooks and online selling channels. Joseph is the author of “The $20 SaaS Company: From Zero to Seven Figures Without Venture Capital”, which published on June 6, 2021.

Sync with Connex is one of 900+ subscription-based companies using Baremetrics to understand key metrics and accelerate growth. To see how Baremetrics can make a difference for your business, start a free trial today.