Customers churn because they don’t want to use your product anymore, right?

There’s this “little” thing called involuntary churn that’ll slowly eat away at your business if you let it go unchecked. And unfortunately, a lot of SaaS and subscription-based companies don’t take any action to stop it from happening.

Whether you’ve never heard of this type of churn before, or you know what it is but just aren’t sure what to do about it, we got you covered.

In this guide, we’re going to explain what involuntary churn is, why you can’t afford to ignore it and how to prevent it.

What is involuntary churn? (AKA passive churn)

It generally happens as a result of the customer’s payment failing and never resolving the issue. After a certain amount of time goes by without payment, their subscription doesn’t renew, which results in churn. 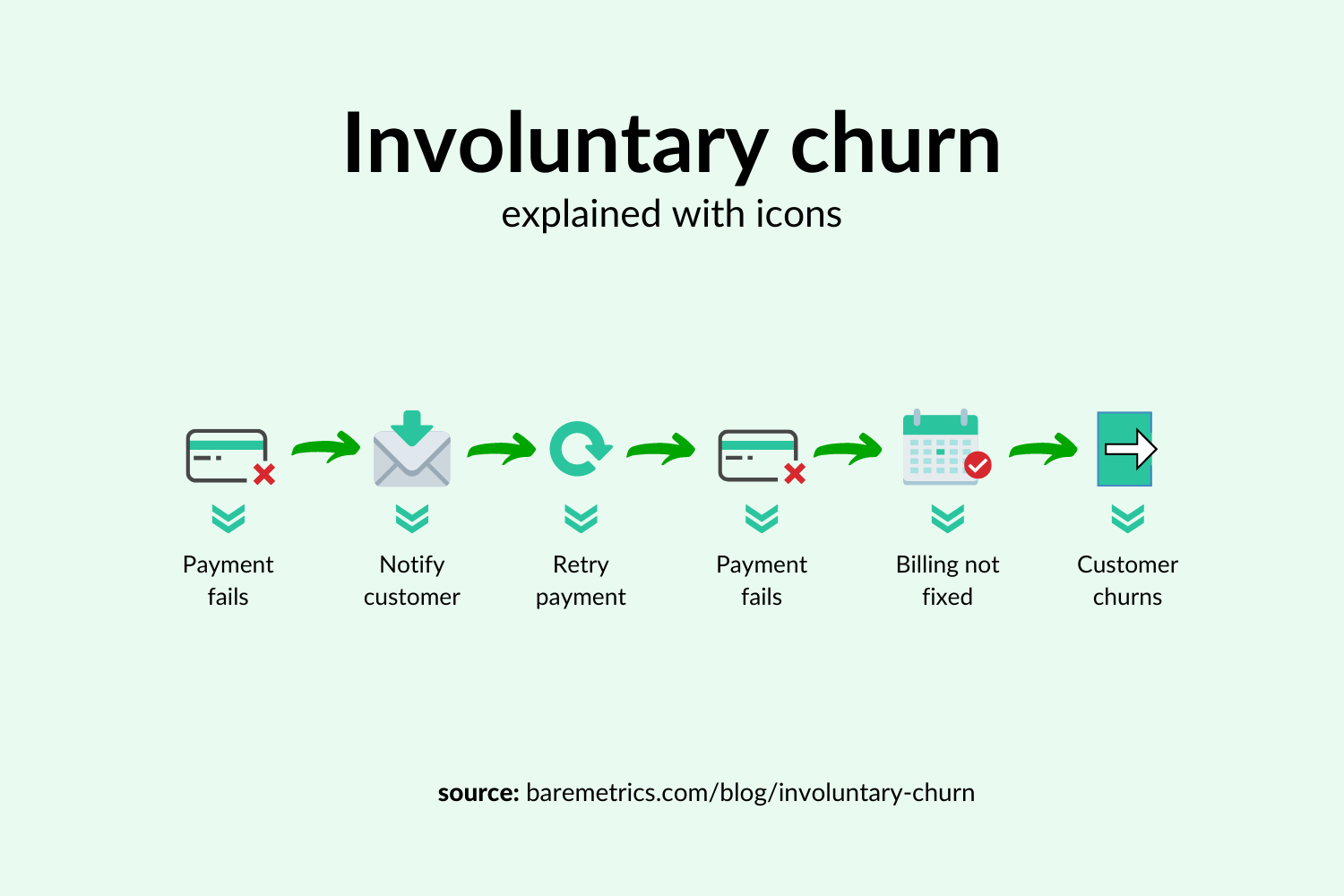 Since involuntary churn isn’t done on purpose, some SaaS and subscription companies don’t put too much effort into stopping it. Most just assume the customer will notice their payment didn’t go through and fix it.

But that doesn’t always happen. And that’s when churn happens.

As you can probably imagine, this is a huge missed opportunity.

Unlike voluntary churn (i.e. when customers cancel their account), customers who churned involuntarily aren’t necessarily disappointed with your product. They usually just had a billing error that needs to be fixed and they’ll continue to pay you.

And according to our data, SaaS and subscription companies lose around 9% of their MRR on average, due to involuntary churn. Unless you’re acquiring an insane amount of new customers every month, most SaaS companies can’t afford to give up that type of revenue. In fact, back in the day, uncontrollable churn stopped Baremetrics from growing.

Now that we know the problem, let’s talk about solutions.

How does involuntary churn happen?

First, you have to understand how failed payments happen. Here are some of the most common causes of involuntary churn.

This is a very common one, and also one of the easiest issues to solve.

You’ve probably had this happen to you before. Your card is about to expire, and your card issuer sends you a new one a month or so before your current one expires. You get it and activate it, but forget to update it on all the subscriptions you pay for.

This is exactly what happens with your own customers from time to time. And unfortunately, the charge won’t go through until your customer updates their card on file.

The billing information is incorrect

Your customer heard all the hype around remote work, and realized it doesn’t make sense to pay ridiculously high rent for an office in San Francisco. So they pick up and move their headquarters to a cheaper city.

As a part of the move, they have to update their address info with their credit card issuer. But they forgot to update their billing info for your product. So the billing info is now out-of-date. Eventually, their card may decline, which leads to… you guessed it—involuntary churn.

Their card is maxed out

Raise your hand if you’ve ever had your card declined for going over your limit!

It’s ok, this is a judgement-free zone. And you’re note alone. In fact, one study found that 52% of Americans have maxed out their credit cards.

Your customers may be a part of that 52%. And trying to charge a card that’s maxed out is like pouring water into a full cup, it’s not going to work.

The card was reported lost or stolen

When most people lose a credit card or have it stolen, the first thing they do is report it to the card issuer and cancel the card.

And until they get a new card and update their billing info for your subscription, their payment is going to fail.

All of those different failed payment reasons we just went over fall into one of two categories:

A soft decline happens when the issuing bank approves the payment, but there’s an issue somewhere else in the payment process. Most involuntary churn happens from soft declines.

Here are some examples of soft declines:

A hard decline happens when the issuing bank doesn’t approve the payment. This happens when:

One of the main differences between a soft and hard decline is a soft decline might go through if you retry it again later. But with a hard decline, no matter how many times you try it, the payment isn’t going to process.

In either case, you need to take action to fix failed payments before your customer churns. The longer it takes for the customer to update their billing information, the more money you’re at risk of losing.

Here’s what you can do.

How to prevent involuntary churn

Like I mentioned, the worst thing you can do with involuntary churn is be passive. You can’t afford to “wait to see what happens”.

Here’s how to handle involuntary churn before and after your customer’s payment fails.

1. Email customers before their card expires

Assuming your customers actually enjoy your product and intend on using it, they shouldn’t churn just because their credit card on file has expired. But it happens every day.

The easiest way to prevent involuntary churn caused by expired credit cards is to give your customer a heads up BEFORE their card expires. This is called “pre-dunning”.

But don’t wait a week before their card expires to notify them.

Most credit card issuers will send customers a new card 30-60 days before their old one expires. So you should send them an email 30 days beforehand since they’ll likely have the new card by then.

If you use Recover (which you should be), you can automate this process. We send out a customizable email 30 days before your customer’s card expires, and another one seven days before. 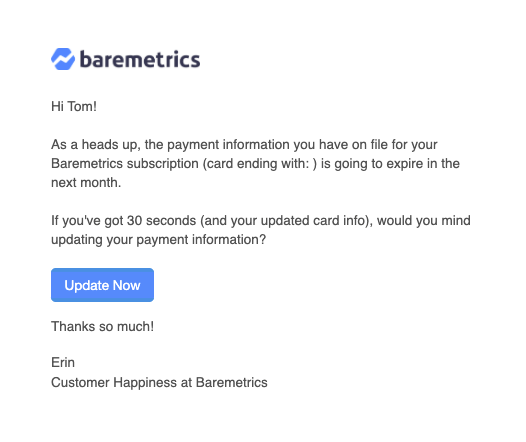 This is such a simple step, yet way too many SaaS companies aren’t doing it. Just set it up and let it save you money.

This next tip is a little controversial. Some companies don’t send notifications before renewing annual subscriptions. The thought process being that it might give customers an opportunity to cancel their account.

But here’s the thing.

If a customer wants to cancel, seeing a charge for hundreds (or thousands) of dollars on their account that they weren’t expecting isn’t going to convince them to stay.

On the flipside, sending annual renewal emails can give you an opportunity to prevent failed payments and involuntary churn.

Most credit cards expire every three years. So there’s a good chance that some of your annual customers have gotten new credit cards between the time they originally signed up for your product and the time they’re up for renewal.

Sending an email beforehand will remind them they have a charge coming up, and give them a chance to update their billing info if they need to.

Here’s the email we send to customers before their annual subscriptions renew. 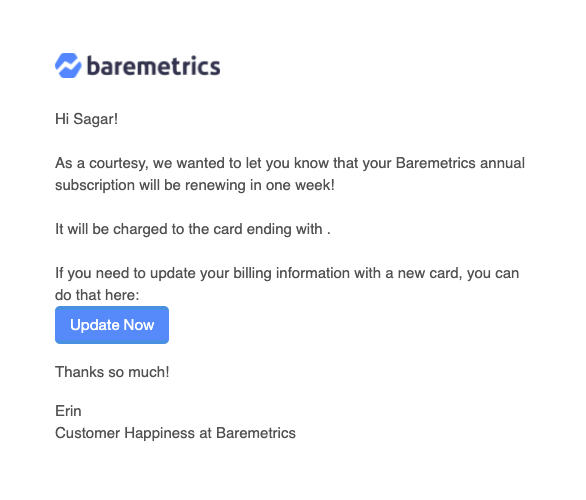 For reference, we’re averaging a 73% open rate and 11% click-through rate with this email.

3. Use paywalls and in-app reminders

Have you ever had someone owe you money, but they never never bring it up when they see you?

You go along with it, even though it bothers you deep down inside that they still haven’t paid you the money.

Well, that’s kind of what it’s like when your customer’s card declines, but you keep letting them use your product without saying anything.

It’s called involuntary churn for a reason. Sometimes your customer genuinely doesn’t realize their card has expired or there was an issue with their payment, so you need to remind them.

I may not be able to help you collect your debt from your friend, but for your business, you can set up a paywall for customers when their payments fail.

Here’s an example of what we do at Baremetrics. When a customer’s payment fails, we put up an in-app notification that looks something like this:

We give customers a 7-day grace period in order to update their billing info. During the grace period, they can still use the app, but the notification will stay at the bottom of the screen. 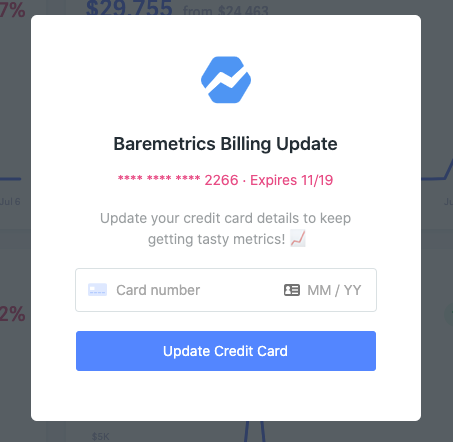 If you want to set up something similar (it’s working very well for us), we do this all with Recover.

It’s super easy to set up, and a lot less awkward than reminding your friend they owe you money.

When I first joined Baremetrics and was learning about how the product works, I remember our head of growth telling me about some of the benefits of Recover.

One of the things he told me was that a lot of popular payment providers that SaaS companies use will typically only send one or two emails after a payment fails. I found that to be super odd.

As a marketer, I’ve been conditioned to think of most emails as campaigns. You send multiple emails to get the recipient closer to an end-goal or action.

For instance, you wouldn’t just send one onboarding email to new customers. And you don’t just send a single email to people in trial or new leads from an ebook or webinar.

So why would you only send one email to customers that owe you money?

That was one of the reasons why we made Recover. You can (and should) send a series of dunning emails to customers to increase your chances of recovering missed payments.

If you’re not sure what a dunning email is, or if you know what they are and want some inspiration for making your own, check out this guide: How to Write Effective Dunning Emails (30+ Examples Included)

But long story short, sending multiple dunning emails gives you more opportunities to recover revenue. As you can see from the screenshot above, we’ve recovered tens of thousands in potentially lost revenue by sending follow-up emails for delinquent customers.

Most payment providers have a built-in feature that’ll allow them to retry recurring payments if they decline. For instance, Stripe will retry credit card payments up to four times if the payment fails.

This is a great way to prevent involuntary churn from soft declines.

Remember, a soft decline means that the payment failed because of something that’s fixable, or sometimes a technical issue. So if it’s retried later, the payment might go through. The customer might’ve just had to update their expiration date or billing info.

One word of caution though. You should always reach out to customers when their payments fail. Don’t just keep attempting to charge their card over and over again. And if you’re going to automatically retry their cards, space it out instead of trying to charge it once a day.

Don’t be passive about involuntary churn

The good thing about involuntary churn is that it’s fairly simple to reduce. The bad thing is that it seems like such a small problem that it’s easy to ignore.

If you implement the five tips we went over in this guide, you should easily be able to start recovering a good chunk of the revenue you’re losing from failed payments. But if you choose to play the sit and wait game, you’ll end up digging your business in a hole that’s hard to climb out of.