Churn MRR is the amount of monthly recurring revenue lost due to customer cancellations. It’s often calculated against MRR to extract a percentage called Churn MRR Rate. Putting Churn MRR into a percentage provides a quicker understanding of the impact churn is having on the business.

If you give customers the opportunity to downgrade their plan to a lower pricing tier, you have to factor this in too. Simply add these losses to the top part of the equation. (We’ll discuss this more below.)

An important metric for SaaS with pricing tiers

In summary: Churn MRR and the numbers responsible for it help you identify weaknesses as a whole and for specific types of customers.

Other contributors to Churn MRR

Cancellations usually account for the bulk of lost MRR but downgrades are a contributor as well.
As shown in a visual from Chaotic Flow, calculating your gained MRR (new customers and upgrades) against lost MRR (cancellations and downgrades) paints a clear picture of how churn affects growth. 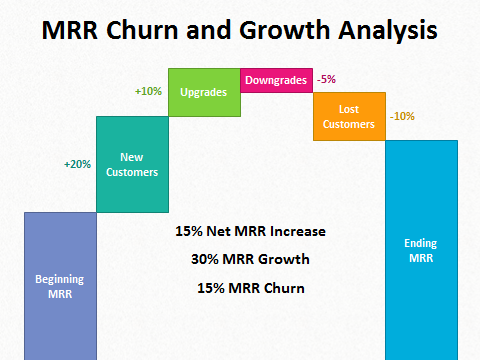 On the right side of the visual are the two primary sources of MRR Churn: lost customers and downgrades.

Downgrades include the removal of a monthly add-on service or a switch to a lower-priced base service. To reduce downgrades, think of ways to enforce the value of a customer’s current plan or add more inclusive features to their existing plan.

Putting it all together

If you have lower pricing tiers that customers can downgrade to or add-ons they can remove, it’s important to expand the top part of the equation beyond lost customers:

Like our initial equation, the result here is your Churn MRR Rate.

An article by Lighter Capital shows another approach to calculating Churn MRR that’s worth checking out. It discusses how to use contraction MRR, expansion MRR, and reactivation MRR — in combination with Churn MRR — to figure out your Churn MRR Rate.