Does “you get what you pay for” actually apply to SaaS companies?

Depends on who you ask.

While the concept is simple enough, many products and services leave us wanting more. That said, upgrading to a “bigger” plan shouldn’t feel like highway robbery.

And on the flip side, your customers shouldn’t feel forced to pay month-to-month for services they’re not actually using on a regular basis.

Charging your customers per-use not only makes your product more affordable and accessible, but also empowers users to only take advantage of the features they need.

Nothing more, nothing less.

In this guide, we’ll take a deep dive into usage-based pricing, how it works and who it’s for.

What is usage-based pricing, anyway?

Let’s kick things off with a quick definition.

Usage-based pricing is a SaaS pricing model where cost is based on consumption, charging customers on a “per-use” basis. For example, users might be charged based on the number of subscribers reached or API calls requested.

With usage-based billing, users are charged at the end of a billing cycle (typically monthly) based on how much they’ve used your product.

Perhaps the most basic way to conceptualize usage-based billing is as a “pay as you go” plan (think: old-school phone plans prior to unlimited data, minutes and texting).

If you have a month where you use a product less, you spend less. The converse is also true.

For example, Twilio’s SMS service scales up (in their own words) “whether you need 1 or 100,000 numbers.” Beyond customization, this structure highlights how usage-based pricing can help users plan and price out exactly what they need prior to payment.

There are also examples of used-based pricing that go beyond traditional “pay as you go” plans.

Take Zapier, for instance. Their pricing structure is more akin to traditional tier-based pricing, in which users can customize their plans based on the number of “Zaps” and tasks they need.

Users can pre-pay and upgrade as needed based on their consumption...

This highlights some of the nuances of usage-based pricing and how it can actually be combined with other pricing models.

How well do you know your business?

What are the benefits of usage-based pricing?

Usage-based pricing is often presented as a sort of win-win for customers and companies alike.

That is, your users enjoy some much-needed flexibility in terms of their budgets while also holding themselves accountable for how much they end up using your product..

And although usage-based pricing might not be as straightforward as something like flat-rate billing, consider some of the key advantages below:

Costs scale alongside your users as they grow

If you’re on a shoestring budget, shelling out hundreds of dollars per month on a new SaaS product might be out of the question.

However, just because a potential customer is on a tight budget now doesn’t mean they’re going to be strapped for cash forever.

Usage-based pricing gives your leads the opportunity to test the waters of your product and enjoy a taste at a reduced cost. On a pay-as-you-go model, customers can up their spending as their own companies and budgets grow.

The more money your customers save and make, the more they can invest back into their businesses (and ideally, your product is part of the equation).

Nobody wants to feel like they’re locked into a long-term contract.

Likewise, customers don’t want to feel forced to use a product or service “just because.”

Especially during turbulent times, flexibility matters. Giving folks the opportunity to scale down (or scale up) their spending means that they can remain your customers even if their budget changes.

And because usage-based pricing doesn’t inherently require users to cancel their plans, customer retention is built into it. In other words, gaps in service and “slow” periods don’t require cancellations.

Usage-based pricing opens you up to a wider customer base

With pay-per-use pricing, you’re less likely to “price out” your prospects.

Offering a la carte services allows you to expand your audience to include “power users” and people who might want to use your service every now and then.

Okay, so what are the downsides of usage-based pricing?

We’ll bite: although usage-based pricing definitely has its benefits, it’s not without its drawbacks.

Your revenue is inherently less predictable

This is the big one.

It’s much harder to keep your revenue stream consistent when product usage and payments fluctuate so much from user to user. Inevitably, you’re going to experience peaks and valleys in terms of how much money you’re bringing in.

Although this isn’t a negative per se, it’s something your business needs to be conscious of. For example, a martech solution might experience spikes in usage during the holiday season, which then slows down for the rest of the year.

With per-user pricing, what users essentially “get” as part of their service is usually pretty straightforward.

But if someone is totally new to your product, they might not have any idea how many API uses they need. For example, $12/mo per-user is easier to understand versus $0.0010 per-use.

Sure, your leads and prospects can probably do a bit of a math to crunch the numbers. That said, you’re inherently putting extra work on your customers which could potentially scare them away.

Simply put, customer acquisition is tough. You obviously don’t want to put in the legwork to get someone to your pricing page only to leave them scratching their heads.

One way to counteract this is to offer a base price point and charge for additional usage like Geniuslink does. They charge a flat rate of $5, and an additional $2 per 1,000 clicks. Scaling up in smaller increments also makes it a lot less intimidating. 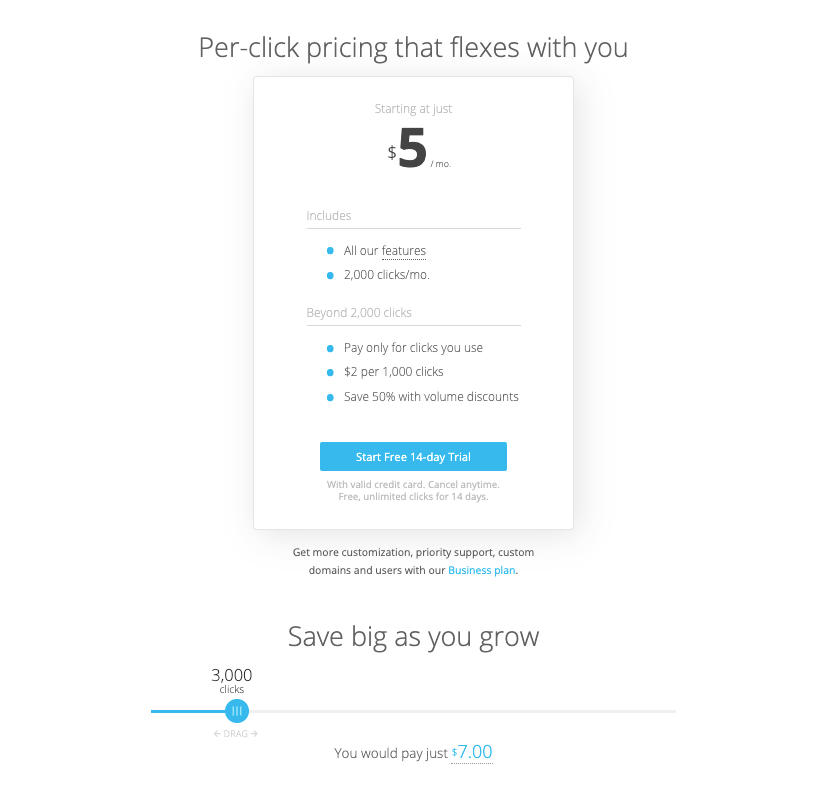 Who is usage-based pricing best for?

There are tons of variables to the SaaS business model and pricing is arguably the most important.

And despite popular belief, there is no “right” way to price your product.

Even so, some companies benefit more from usage-based pricing than others. Below we’ve highlighted some specific cases.

If you offer a service where you’re quite literally encouraging your customers to scale up their audience, revenue and subscribers, usage-based pricing makes perfect sense.

Think about email marketing, where list growth and revenue are tied to each other. Tools like ConvertKit offer a sliding scale in which your monthly payments go up as your list grows.

ConvertKit explicitly says they’re dedicated to helping customers scale. Meanwhile, users are seamlessly able to upgrade to the next pricing tier without being interrupted. 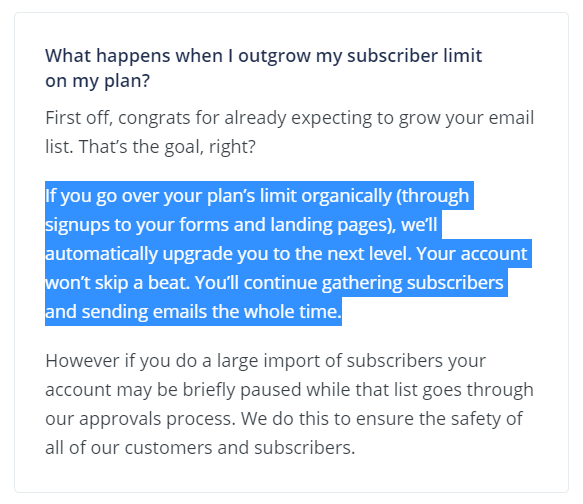 Tools like SendGrid offer a similar sort of “scaled up” pricing structure. Again, the idea here is that a larger list demands higher payment as your business grows.

This approach to pricing is a sort of subtle way for SaaS and subscription businesses to not only serve as service providers, but also cheerleaders for their customers.

Let’s say you offer a one-off service or something that customers more than likely aren’t going to need to use on a regular basis.

Take TheChecker, for example. It’s a standalone tool that allows users to verify their email lists. Users can pay for one-off usage based on their list size or purchase bulk credits for later use. Either way, users only get what they pay for. 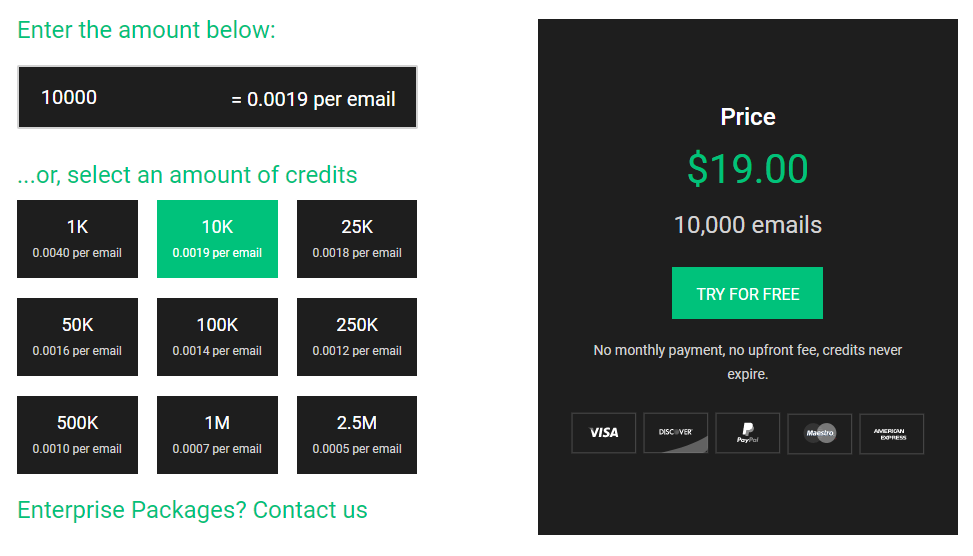 We noted earlier that usage pricing can be confusing, but this approach is crystal clear for customers who only need to know the size of their email list to figure out how much they’ll be paying.

This may be a niche case, but it’s a great example of how usage-based can make a tool both valuable and cost-effective in the eyes of the customer.

Scalable pricing is a smart move for companies that deal with seasonality. For instance, marketing software where campaigns are seasonal or centered around occasional launches.

Another great example of this is Leadfeeder, offering a sort of hybrid billing model which scales up depending on how many leads the tool discovers. This gives users the opportunity to ramp up their spending in conjunction with a campaign and scale back accordingly. 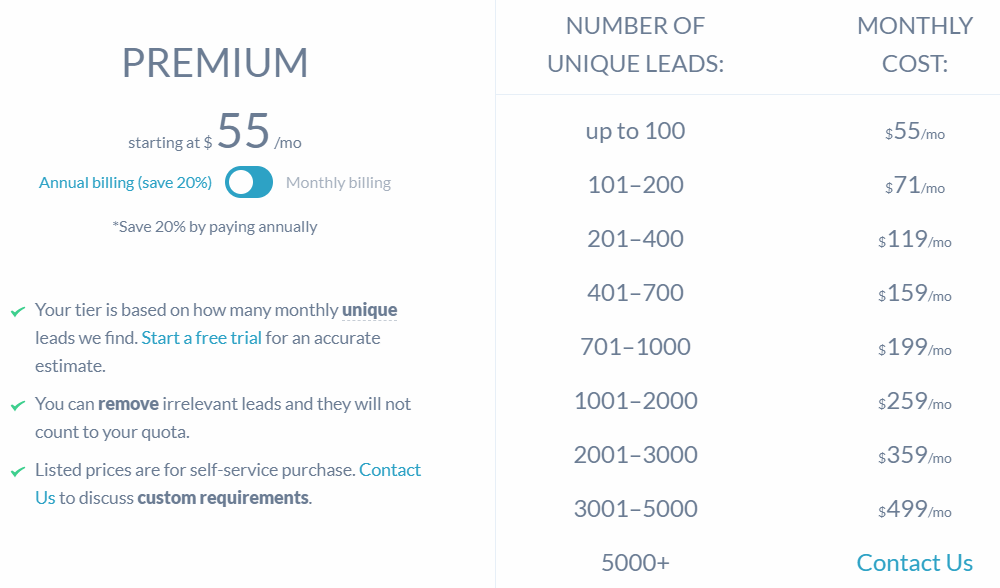 See how that works?

What else should I consider about usage-based pricing?

By now you probably have a good idea as to whether or not usage-based pricing makes sense for your product.

To wrap things up, we’ll cover a couple more considerations if you’re on the fence about a pay-as-you-go model.

As highlighted by some of our examples, keep in mind that a sort of hybrid pricing model based around usage is possible. For example, tools like Call Tracker charge a usage fee on top of traditional, per-month pricing.

This gives you the best of both worlds, allowing you to build regular recurring revenue that’s more stable than usage-based revenue alone. Of course, this approach requires some serious buy-in from customers who must justify not only a monthly cost but also additional spending on top of it.

You can also introduce usage-based pricing as a matter of either-or. For example, tools like Zailab allow users to choose between fixed-rate or consumption-based pricing for their service usage.

This requires users to do their homework to figure out the best deal, but again puts the accountability on your customers.

Finally, make sure that you keep an eye on what competitors and other players in your space are doing. If none of your neighbors offer usage-based pricing, there’s probably a reason why.

Keep tabs on competing pricing models to likewise understand if there are opportunities to experiment with usage-based pricing.

Does usage-based pricing make sense for your company?

Listen: SaaS pricing is complicated. We get it.

Whether or not consumption pricing makes sense for you really depends on your product and industry. That said, it’s definitely worth exploring if you offer a scalable or seasonal service.

Regardless, consider how tools like Baremetrics can help you monitor your growth no matter which pricing model you offer.

We also invite you to check out our Open Startups section to see how real-life companies (like the aforementioned ConvertKit) are scaling up and pricing their services.

Brent Barnhart is a professional writer specializing in B2B SaaS content. When he's not tackling the latest business buzzwords, you can often find him strumming the nearest guitar.