A couple of months ago I was watching a show that was attempting to demonstrate how easy it was for an average person to pass themselves off as a psychic. They had invited a group of unsuspecting participants to serve as targets. However, what the participants didn’t know was that there was a crew of staff combing through their social accounts beforehand, looking for anything they could use as information.

Of course, the participants were amazed with the accuracy of the psychic’s ability, going so far as to state that, there was no way they could have known what they did.

At the end of the show, the participants were informed of the trickery and left with a message that just about anyone has the ability to become a psychic.

While I’m not in the position to confirm or deny the credibility of every other “real” psychic in the world, I can tell you this with an absolute straight face: I am psychic.

Only, I can’t see into anyone’s personal life, I only have the ability to tell you whether or not someone is about to leave you as a customer. And, roughly how long before they’re going to do it.

But, I have a confession to make. Just like on the show I mentioned above, my ability didn’t come naturally, nor was it a gift I was given. Simply put, it’s just a bit of trickery. Or, as we say in the marketing world, a hack.

It’s statistically based and easy to learn. So, I’m going to teach you how you too can become a marketing psychic like myself in just three simple steps.

The questions are very specific and have been tested and refined over 12 years and millions of surveys. The biggest and most successful companies in the world swear by them. Simply put, they are: 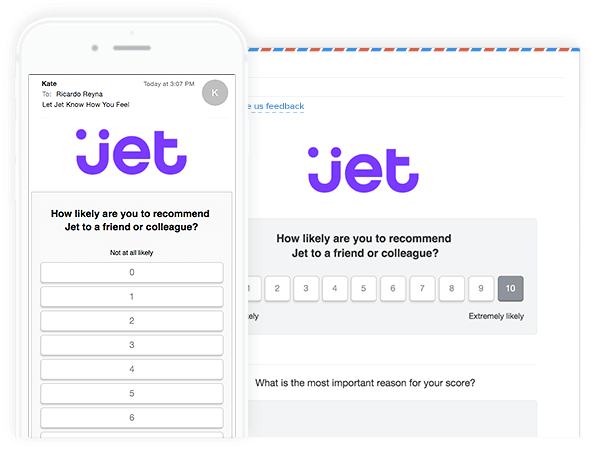 This is the basis of what is called an NPS survey (Net Promoter Score). Created in 2003, NPS has become the standard by which companies measure their performance in the eyes of their customers.

There are a ton of options for getting started with NPS, but I wouldn’t be a good marketer if I didn’t suggest using Promoter.io. I may be biased, but our platform is specifically focused on helping you use NPS to reduce churn and drive growth, which is precisely what we’re trying to do here.

Step 2: Find your detractors and passives

“Detractors” and “Passives”…these two terms are specific to the NPS process. From a scoring perspective, anyone who scores you a 0 to 6 is considered a detractor. Anyone scores you a 7 or an 8 is a passive (passively satisfied).

For understanding churn, or more specifically, how to predict it, you must know who these customers are. This is 50% of your ability to becoming the Silvia Browne of SaaS. For Baremetrics, they increased customer loyalty significantly using only the information from understanding what customers fell in which buckets.

Step 3: Apply the psychic algorithm to your database

That sounds a lot more complicated than it really is. Honestly, it’s more about just simply understanding some statistically-backed numbers.

Over the past two years, we’ve looked at over 5 million data points to arrive at the real secret to understanding how long before your customer is going to churn, which I’m going to share with you now.

Detractors: Roughly 50% of these customers are going to leave in less than 90 days. That means if you have an ARPU of $100 and 50 detractors, you have $2,500 in recurring revenue that will be gone in the next 90 days.

And, something maybe a bit more alarming …

Passives: Nearly 40% of these customers will churn in less than 180 days. For many companies, passives make up the largest majority of your customers. These are the “satisfied” customers which most of us think is a good sign. Wrong.

The trouble for most companies here is that passives are neither raving fans nor massively unhappy. They sit quietly in the background and go largely ignored. These are the people that, while not unhappy, will have no problem switching to a ‘better’ option, be that a slightly better price or just something new. There is no loyalty to your brand or product.

All combined, if you have 50 detractors and 100 passives and an ARPU of $100, you can safely assume that $5.5k to $7.5k of your monthly revenue is likely to be gone within the next three months.

Changing the course of future churn

With your new psychic ability, it’s now time to do some good. You probably don’t have a flux capacitor or a Delorean, so you can’t go back in time for those you’ve already lost, but you can certainly change the course of the future for those that you’re about to.

Unfortunately, your new predictive ability has a small limitation. While you now know that up to 50% of your detractors are going to leave in 90 days, you just don’t know which 50%. So, just like any master psychic does, you’ll need to engage with everyone until someone raises their hand. You can even fully automate it, if you’d like.

The good news is, a well-structured NPS process will elicit actionable feedback from your unhappy customers that otherwise may not speak up. With that in hand, it’s just a matter of listening to their needs and responding with care. This will allow you to have a massive impact in overall churn and at the same time understand any common trends that shift sentiment in this direction.

To make responding even easier, we’ve put together a cheat sheet that you’re free to use.

Bonus prediction: Without engaging beyond the survey, only about 20% of your promoters will actually refer or recommend a new customer to your business. Using a platform like Promoter.io will allow you to drive further engagement and get more promoters to take action and drive organic growth.

Dana Severson is the Director of Marketing at Promoter.io (the most powerful and comprehensive NPS platform for driving growth and reducing churn). You can find him at @danerobert or dana@promoter.io.